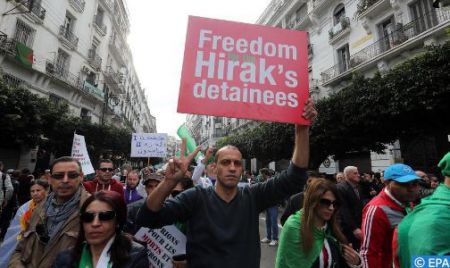 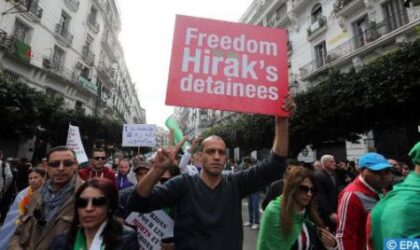 The request was issued Monday by Dar El-Beida court in capital Algiers against Walid Nekiche, a young student from Tizi Ouzou, charged with plot against the state and threat to national security.

He was nabbed on the sidelines of the Hirak protest movement on Nov. 26th in the capital and has been held in prison since then.

Nekich according to his defense was victim of torture during his brief detention in one of the country’s military barracks where he was harassed with questions.

The court’s sentence request is the toughest ever by a court against a defendant arrested in connection with the protests which erupted in February 2019 in reaction to the former president’s plan to run for another term in office though glued to a wheelchair.

Several people including journalists, rights and pro-democracy activists have been detained and sentenced in connection with the Hirak.

Nekish’s village members, Hirak activists and his friends marched to demand his release and judged the charges fabricated.

The judiciary also issued arrest warrant against six other people also believed connected to Nekish’s case. Two of them have fled the country while the remaining four have enjoyed protection from local authorities who have refused to hand them over to the judiciary.

In another story, the online media also raised the case of activist Rachid Nekkaz who has been arrested and remanded in custody since December 4, 2019 in Koléa prison near Algiers, and who has just been transferred, in inhuman conditions to a prison deep in the desert, in Lebyodh Sidi Chikh, 756 km from Algiers.

His transfer from his family’s place of residence and from the place of the territorially competent court (Algiers) to rule on his case, even before he is tried, constitutes a serious infringement of the rights of the litigant, NGO Riposte international said. The administration has taken the place of justice by condemning him to expulsion, an arbitrary administrative measure which de facto deprives him not only of the right to defense, but also of the right to appropriate care, as he is suffering from prostate cancer.

Riposte internationale recalls that no international human rights organization is allowed to go to Algeria to inquire about the dilapidated state of the prisons where more than 90 Hirak activists are detained for crimes of opinion, while Algeria has ratified the charter of prisoners’ rights.

This escalation in the repression of the Hirak, the arbitrariness against Rachid Nekkaz and the other prisoners of conscience confirms the repressive management of the Hirak, which, for almost two years, has not ceased to peacefully demand democratic change and the rule of law.