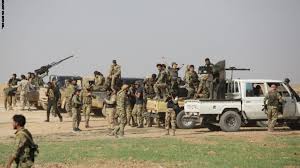 US calls for immediate withdrawal of foreign forces from Libya

Washington called on Thursday for the “immediate withdrawal” of Russian and Turkish forces from the country. This concerns both the military and mercenaries. A firm statement by the new Biden administration that contrasts with that of the previous administration.

This very strong statement against the Russian and Turkish military presence in Libya was made by Richard Mills, the acting US ambassador to the UN during a Security Council video briefing on Libya.

“We call on Turkey and Russia to immediately initiate the withdrawal of their forces from the country and removal of the foreign mercenaries and military proxies that they have recruited, financed, deployed and supported in Libya,” he said.
Turkey is the main patron of the UN-supported government in the capital, Tripoli, while the UAE, Russia and Egypt back the forces of military commander Khalifa Hafter who runs most of the east and the south.

Mills made clear that the Biden administration backs the rival Libyan parties’ demands for the end to military intervention and the withdrawal of foreign forces and mercenaries as outlined in the October 23 cease-fire agreement.

“External actors who have militarily intervened in this conflict have wholly and briefly ignored Libyans’ demands,” he said. “We call on all external parties to include Russia, Turkey, and the UAE to accept Libyan sovereignty and immediately cease all military intervention in Libya.”

He also stressed that it is “critical for the Libyan people and the international community to take all necessary steps to prevent spoilers from standing in the way of this political transition.”

“The United States believes that it is incumbent on all of us to use fully the tools that we have at our disposal, to affect the change we want – and need – to see in Libya. This includes giving our full support to the UN sanctions regime, particularly to the arms embargo, and the Panel of Experts,” the US diplomat said, insisting that “an inclusive, negotiated political solution is the only means to end the conflict and validation that the UN political process is the only viable platform to achieve peace and national reconciliation in Libya.”

Barely two weeks after his inauguration, Joe Biden’s tone on the Libyan crisis changed dramatically. Gone are the days when Donald Trump exchanged phone calls with General Haftar to salute their common vision on Libya, in the midst of a murderous offensive on capital Tripoli.

Washington hardened its tone and demanded the application of the October 23 ceasefire agreement that gave foreign mercenaries three months to leave Libya. According to the UN, these mercenaries would be 20,000 in total on both sides.