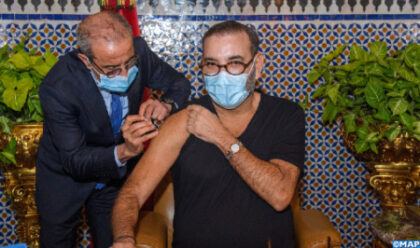 King Mohammed VI has kick-started this Thursday at the Royal Palace in Fez, the national coronavirus vaccination campaign.

On this occasion, the Sovereign received the first shot of the vaccine against Covid-19.

Vaccination will be free in line with directives from King Mohammed VI.

The country placed orders for 66 million doses, enough for 33 million people as it plans to vaccinate 25 million people starting with health workers, security forces, the army, teachers, and people older than 75.
The campaign will unfold gradually and will benefit all Moroccan citizens and foreign residents aged between 17 and over 75.

The vaccination campaign will make it possible to achieve the expected levels of collective immunization and protect the population against the pandemic.
Th