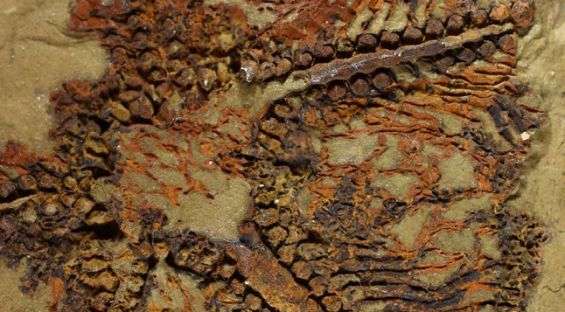 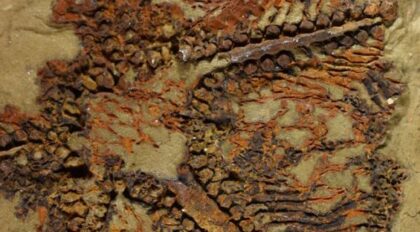 A group of researchers from Cambridge University and the University of Western Australia has unearthed a fossil starship in Morocco that dates back 480 million years. The fossil specimen is the world’s oldest-known starfish ever discovered, providing an insight into the evolution of starfish and other echinoderms.

Headed by Aaron W. Hunter from the department of Earth Sciences at the University of Cambridge,the researchers discovered the starfish fossil in the Fezouata Shale in Zagora, located in central Anti-Atlas, Morocco.

In their study, published by the Royal Society on Wednesday, January 20, researchers indicate that the newly-identified species is from the so-called Ordovician period.

Named «Cantabrigiaster fezouataensis» by researchers, the starfish has a unique design that lacks 60 percent of the features of a modern starfish’s body plan.

Actually, the world’s oldest-known starfish has five feathery arms, wider that those found on modern starfish. «The level of detail in the fossil is amazing — its structure is so complex that it took us a while to unravel its significance», Dr Hunter wrote.

The discovery is a missing link to the ancestors of the fascinating sea creatures. According to the same study, prior to this recent discovery, the oldest starfish specimen record was 50 million years younger.

The Morocco fossil will help understand how the starfish and related animals evolved, millions of years ago.

«If you went back in time and put your head under the sea in the Ordovician, then you wouldn’t recognize any of the marine organisms — except the starfish, they are one of the first modern animals», Hunter said. «Finding this missing link to their ancestors is incredibly exciting», he added.

Along with other researchers, the evolutionary palaeoecologist hopes to answer other questions regarding the evolution of the starfish. «One thing we hope to answer in the future is why starfish developed their five arms», he said.

«It seems to be a stable shape for them to adopt — but we don’t yet know why. We still need to keep searching for the fossil that gives us that particular connection — but by going right back to the early ancestors like Cantabrigiaster, we are getting closer to that answer», Hunter said.

Morocco has a long history of fossil discovery. In 2017, scientists found the world’s oldest fossil of Homo Sapiens in the Jebel Irhoud archaeological site.

In October 2020, another group of scientists found a small flying dinosaur near the village of Hassi El Begaa in the Kem Kem region in eastern Morocco.

The small dinosaur from the pterosaur species was named Leptostomia begaansis, meaning “Slim mouth” in Greek, with “Begaaensis” referring to the Moroccan village Hassi El Begaa.

In November 2020, researchers from the universities of Zurich and Chicago published a paper showing a scientific discovery that analyzed fossils of an ancient shark found by the Moroccan archaeologist Said Oukherbouch in Tafraoute, Morocco, in 2016.

According to the researchers, the ancient shark, which belongs to the Ferromirum Oukherbouchi species that existed from the Late Devonian period, 360 and 375 million years ago, will help scientists better understand the species’ jaws function.

And recently, researchers from several countries have recently discovered in Morocco a new species of Mosasaur, a marine lizard with shark-like cutting teeth, which lived during the Cretaceous period 72 to 66 million years ago. The discovery of this new species of mosasaur shows the extreme diversity of marine reptiles in the phosphates of Morocco.