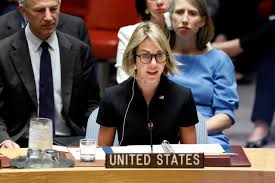 The United States has submitted to all 193 UN member states the US presidential proclamation recognizing Morocco’s full sovereignty over its entire Sahara territory.

The text of the American recognition of the Moroccan Sahara was sent to all UN member countries by US permanent representative to UN Kelly Craft in the six official languages of the UN.

“On December 10, 2020, President Donald J. Trump recognized through this proclamation “that the entire Western Sahara territory is part of the Kingdom of Morocco”, writes the US Ambassador to the UN in her synopsis letter sent to the chairman of the Security Council and UN Secretary-General.

The US presidential proclamation states that the United States “reaffirms its support for Morocco’s serious, credible, and realistic autonomy proposal as the only basis for a just and lasting solution to the dispute over the Western Sahara territory”.

“The United States believes that an independent Sahrawi State is not a realistic option for resolving the conflict and that genuine autonomy under Moroccan sovereignty is the only feasible solution”, stresses the official document.

“We urge the parties to engage in discussions without delay, using Morocco’s autonomy plan as the only framework to negotiate a mutually acceptable solution”, says the US presidential proclamation.