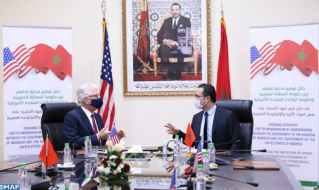 The United States has pledged to help Morocco protect its cultural heritage from smuggling and step up the strategic partnership sealed between the two countries.

An agreement was inked on Thursday in this regard by American ambassador to Morocco David T. Fischer and minister of Culture Othmane El Ferdaous while US Assistant Secretary of State for educational & cultural Affairs Marie Royce participated remotely in the event from Washington.

Under this agreement, the US government pledges to restrict the import of certain archaeological and ethnographic material from Morocco. The two countries also agreed to enhance further dialogue, contacts and cooperation between their scientific, educational, and cultural institutions.

“The United States has deep respect for Morocco’s cultural heritage,” Assistant Secretary Royce said. “This agreement is yet another example of the long history of collaboration between the United Sates and Morocco.”

For his part, El Ferdaous said this agreement comes after a year of preparatory work done by cultural specialists from the US State Department, the US Embassy, and from the Moroccan Ministries of Foreign Affairs and Culture.

It is part of the efforts led by Morocco under the leadership of King Mohammed VI to preserve the national cultural heritage, he added, noting that the agreement shows Morocco’s commitment to work in close collaboration with the institutions and services concerned with the fight against the illicit trafficking of cultural goods in the two countries.

For his part, Ambassador Fischer thanked King Mohammed VI for his unwavering support for this type of critical work aimed at preserving the Kingdom’s cultural riches for future generations.

“This agreement allows our cultural institutions and law enforcement to work together to protect Morocco’s cultural patrimony from looters and traffickers, and it promotes expanded cultural exchange between our countries,” the US diplomat said.