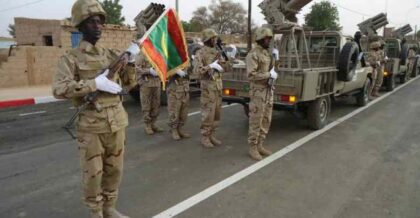 Mauritania whose economy has been hit by Polisario’s banditry is set to reinforce its military presence in its northern borders in a move that signals Nouakchott’s determination to avert the Polisario’s incursions into its territories.

The Algeria-backed Polisario separatists have blocked a critical border passage linking Morocco to Mauritania for three weeks. The passage which lies in an UN-patrolled buffer strip, was reopened in November by the Moroccan armed forces after all UN efforts failed to dislodge the polisario militias. Morocco then extended its security wall to the Mauritanian border barring the road once and for all for the Polisario.

Any future attempt to disrupt the free flow of commercial and civilian traffic by the Polisario would entail an incursion from the Mauritanian border, hence the Mauritanian army’s stepping up its vigilance and personnel in the north.

The Mauritanian cabinet has approved a decree to declare the northern borders a critical military area allowing for an increased reinforcement of its forces in the north.

Although the decision was justified with the concern to counter trafficking, terrorism and all forms of organized crimes, observers think the real motives lie in a quest to avert any flare up that may result if the Polisario uses Mauritanian territories to attack Morocco, which may in turn trigger a fierce response from the Royal Armed Forces.

It is worth mentioning that a few days after Morocco’s successful opening of the Guerguarat border post, a senior Moroccan military delegation discussed cooperation prospects with Mauritanian peers. The meeting was seen as laying the basis for closer military coordination between the two neighboring countries.