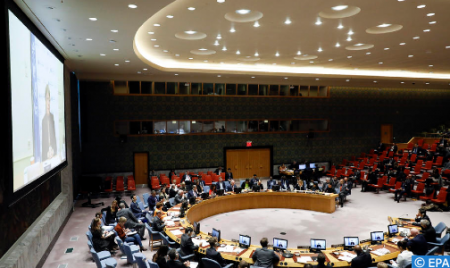 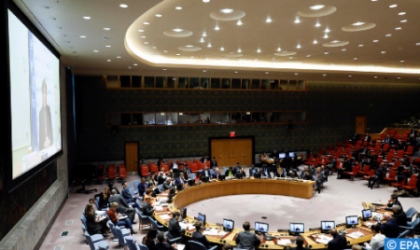 The United Nations Security Council held, on Monday, at the request of Germany, a closed doors briefing on the latest developments of the Sahara issue.

According to diplomatic sources, quoted by MAP, this meeting was an opportunity for the United States to explain, for the first time before the Security Council, the validity and accuracy of the US Proclamation of December 10, 2020, recognizing Morocco’s full and complete sovereignty over its Sahara.

This presentation by a permanent member of the Security Council has a historic significance and fundamental importance for the political and legal consecration of the Moroccanness of the Sahara within the United Nations. At the same time, the US delegation reaffirmed Washington’s strong support for the Moroccan autonomy initiative as the only solution to the regional dispute over the Sahara.

During the consultations, several member States of the Security Council joined their voices to the United States in supporting the Moroccan autonomy initiative as the only serious and credible basis for ending this dispute inherited from the Cold War era, diplomatic sources in New York confirmed.

According to UN diplomats, the Security Council members have unanimously reiterated their support for the UN-led process aimed at achieving a political, realistic, pragmatic, lasting, and compromise-based solution to the dispute, on the basis of Security Council Resolutions since 2007.

In their remarks, the Security Council members stressed the importance of the swift appointment of a new Personal Envoy of the UN Secretary General for the resumption, as soon as possible, of the round-table process, with the active participation of Algeria, recognized by Security Council resolutions as a party to the regional dispute.

They also insisted on the need to create a favorable climate and suitable conditions to allow the resumption of this process where it stopped with the former UN envoy Horst Köhler.

All members expressed concern about the violations of the ceasefire and the military agreements by the polisario separatist group.

Several members finger pointed the Polisario as responsible of triggering the crisis in Guerguarat, as its militias blocked this passage for more than three weeks. This prompted Morocco to intervene to secure, once and for all, free movement of people and goods, and restore calm and serenity in the crossing point. This peaceful action was highly welcomed by the entire international community.

According to the same diplomatic sources, the Polisario has been urged to scrupulously respect the provisions of the ceasefire, which it has publicly denounced and which it violates on a daily basis. The Polisario has also been asked to cooperate with the MINURSO, whose mandate to supervise the ceasefire is being dangerously hampered. In contrast, Morocco’s cooperation with the MINURSO has been widely praised.

This meeting, held in a serene and peaceful atmosphere, was not sanctioned by any statement, despite Algeria’s pressure on some members of the Council, the same sources said.

In the absence of such a result, the Chairman of the Security Council for the month of December, Ambassador of South Africa, Jerry Matjila, had no choice but to reiterate, as a South African only, the ideological position of Pretoria on the Moroccan Sahara. Even his press conference, announced well in advance, was snubbed by the UN correspondents as only one journalist was present.

The highlights of these consultations were the presentation of the US proclamation on the Moroccan Sahara, the reaffirmed support for the autonomy initiative, by two permanent members of the Security Council, as well as the consecration of the irreversible return to normality in Guerguarat. This meeting was also marked by the reference to the letters addressed by King Mohammed VI to the UN Secretary-General, reaffirming that the referendum is dead and buried and that the autonomy initiative, within the framework of Morocco’s Sovereignty and territorial integrity, is the only solution to this dispute.