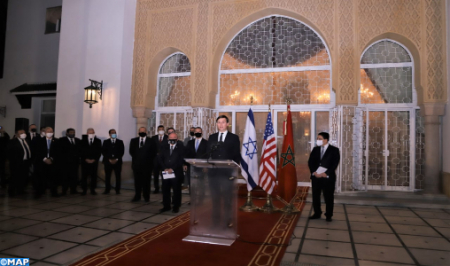 US recognition of Morocco’s sovereignty in Sahara, a rejection of ‘failed status-quo’ – Kushner says 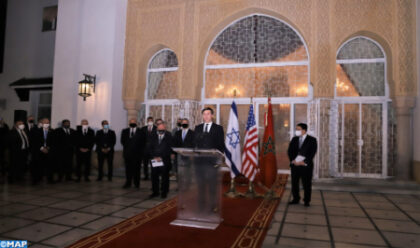 White House Senior Advisor Jared Kushner reiterated the recently adopted position of his country in support of Morocco’s full sovereignty over all the Sahara territory and stressed the primacy of the Kingdom’s autonomy plan.

“By recognizing Morocco’s sovereignty over the Western Sahara, president Trump is rejecting the failed status quo which benefits no one,” Kushner told the press on the sidelines of a visit to Rabat during which he and Israel’s National Security Advisor Meir Ben-Shabbat had talks with King Mohammed VI at the Royal palace.

Every US administration since President Clinton has affirmed its support for Morocco’s serious, credible and realistic autonomy plan, said Kushner, noting that President Trump has also advocated a just lasting and a mutually acceptable solution to the conflict over the Moroccan Sahara.

“Genuine autonomy is the only feasible option but it will take work. We urge all parties to constructively engage with the UN and move forward with negotiations,” said Kushner.

Kushner also affirmed that the US is preparing to open a consulate in Dakhla to promote investments in the Southern provinces.

Jared Kushner also commended King Mohammed VI for his visionary leadership, which places Morocco and the entire region on a very promising trajectory.

“I am particularly grateful to HM King Mohammed VI for his visionary leadership, which places Morocco and the entire region on a very promising trajectory,” said Kushner.

The visit by Kushner and the Israeli delegation in Rabat came after the US proclamation backing Morocco’s territorial integrity following a deal that also provides for resumption of ties between Rabat and Tel Aviv.

Foreign Minister Nasser Bourita said the liaison offices in Morocco and Israel will open in the next two weeks.

With the US Morocco signed a key deal to receive $3 billion in financial assistance for private Moroccan investments in Morocco and in Sub-Saharan Africa.

On the same occasion, head of the Moroccan government Saad Dine El Otmani, Kushner and Ben Shabbat signed a Joint Declaration affirming commitment to forge ahead with the promises contained in the US presidential proclamation concerning the Sahara and to press ahead with full ties between Israel and Morocco including closer economic cooperation.