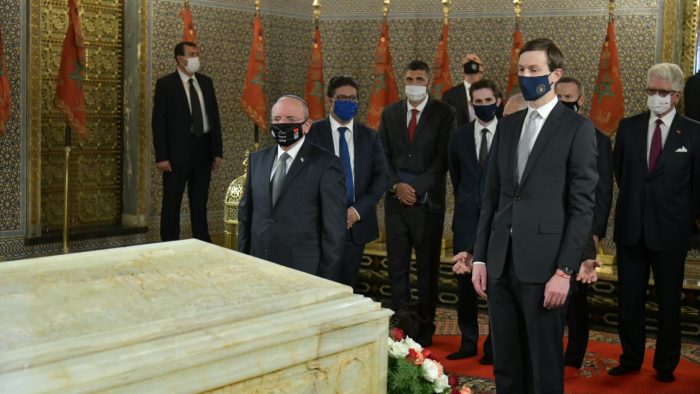 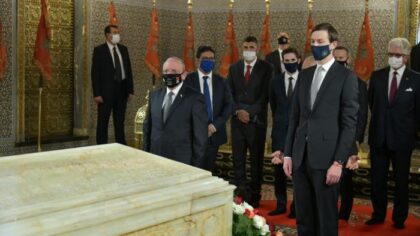 A high-level US-Israeli delegation arrived Tuesday afternoon in Rabat-Salé airport for a visit to Morocco.

Shortly after arrival, the US-Israel delegation visited the Mohammed V Mausoleum, and laid wreaths on the graves of the late Mohammed V and the late Hassan II.

On the eve of the visit, Jared Kushner said he was satisfied with the official trip to mark a new dawn in the Morocco-Israel relations. “We will very proudly advance the Abraham Accords with the first direct commercial flight on EI AI from Israel to Morocco,” he said.

US Ambassador to Morocco David Fischer on his part expressed satisfaction at the fact that both Morocco and Israel have strong ties with the US.

“It is an honor for me to be present today when representatives of the Moroccan government welcome the official delegation coming from Israel,” he said.

The visit of the US-Israeli delegation comes 11 days after Morocco’s announcement of its decision to establish ties with Israel.

King Mohammed VI made the announcement on December 10, saying Morocco and Israel will work to open the liaison offices that were operational until 2002, a statement by the Royal Office then said, adding that the Monarch also announced Morocco’s determination to facilitate direct flights to transport Jewish people of Moroccan origin and Israeli tourists to and from Morocco.

In his promulgation of December 10 recognizing Morocco’s sovereignty over the Sahara, US President Donald Trump also states that “The United States believes that an independent Sahrawi State is not a realistic option for resolving the conflict and that genuine autonomy under Moroccan sovereignty is the only feasible solution.”

This stand was rieterated by Jared Kushner in an interview with Moroccan newspaper Al Ahdath Al Maghribia published this Tuesday. Jared explains that the old approach in the management of the Sahara conflict “has shown its flaws, and that autonomy under Moroccan sovereignty is the only realistic solution to the Sahara issue.