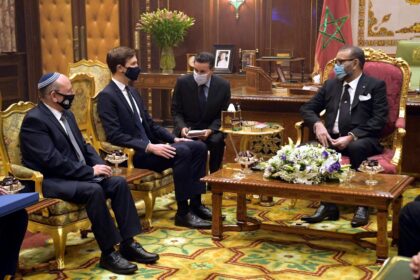 King Mohammed VI, accompanied by Crown Prince Moulay El Hassan, received, on Tuesday Dec. 22 at the Royal Palace in Rabat, heads of the visiting US and Israeli delegations, namely Senior Advisor to the US president Jared Kushner and Israel’s National Security Adviser Meir Ben-Shabbat, as well as Special Assistant to the US President and Special Representative for International Negotiations Avrahm Joel Berkowitz, the Royal Office said in a statement.

During this audience, the Monarch reiterated his full satisfaction with the historic results of the phone talks he had on December 10, 2020, with President Donald Trump.

The presidential proclamation recognizing the Moroccanness of the Sahara, as well as the measures announced for the resumption of cooperation mechanisms with Israel, constitute major developments for strengthening regional peace and stability, the Royal Office statement added.

These measures concern the authorization of Israeli airlines to transport members of the Moroccan Jewish community and Israeli tourists to Morocco, the full resumption of diplomatic and official contacts and relations with Israel at the appropriate level, the promotion of the cooperation momentum and innovative bilateral economy, and moves to reopen liaison offices in Rabat and Tel Aviv.

During the meeting, King Mohammed VI congratulated Mr. Kushner for the substantial work accomplished since his visit to Morocco in May 2018, and which made it possible to achieve this historic turning point in favor of Morocco’s territorial integrity and for his efforts to promote peace in the Middle East, the statement added.

King Mohammed VI also spoke to Meir Ben-Shabbat about the special ties with the Moroccan Jewish community and its members holding responsibility positions in Israel.

The Royal Cabinet statement also said that the meeting between the King, Ben-Shabbat, and Kushner served as an opportunity to reaffirm that the states will fully implement all decisions and measures announced during the Monarch’s December 10 phone call with President Trump.

King Mohammed VI also reiterated the coherent, unwavering and unmovable position of the Kingdom of Morocco on the Palestinian issue, based on the solution of two States living side by side, in peace and security; negotiations between the Palestinian and Israeli sides as the only way to reach a comprehensive and final settlement; and the commitment of the King, Chairman of the Al Quds Committee, to safeguarding the Muslim character of the Holy City of Jerusalem, the statement stated further.

At the end of the audience, a Joint Declaration between the three countries, was signed before the King by the Head of Government, Saad Eddine El Otmani, Jared Kushner and Meir Ben-Shabbat.