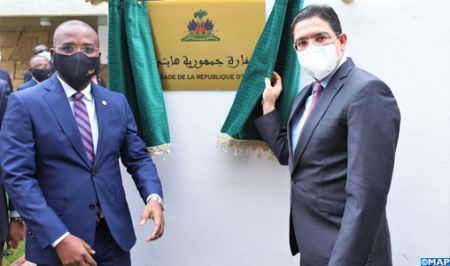 Haiti inaugurates its embassy in Rabat, to open its consulate in Dakhla Monday 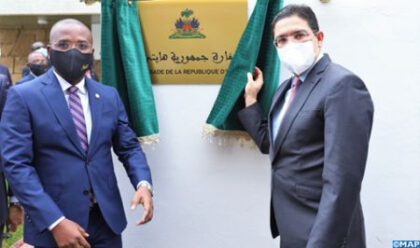 Haiti inaugurated Saturday its Embassy in Rabat, during a ceremony chaired by Haitian Foreign Minister Claude Joseph and his Moroccans peer Nasser Bourita.

Claude Joseph announced, on this occasion, the opening of Haiti’s consulate in Dakhla, on Monday, a move reiterating the Caribbean country’s commitment to support Morocco’s efforts to defend its sovereignty and territorial integrity.

Nasser Bourita recalled in this connection that the total number of consulates opened so far in Dakhla and Laâyoune amounts to 16 diplomatic representations and that four more will follow soon.

“Eight consulates were opened in Laayoune and eight others in Dakhla. Four new consulates will be inaugurated in the coming days, namely those of Haiti in Dakhla and of Bahrain in Laâyoune on December 14, and the consulates of Jordan and of the United States in Dakhla later”, said Bourita.

On the sidelines of inauguration ceremony of the Haitian embassy, the two Foreign Ministers signed two agreements, namely a cooperation roadmap for the 2021-2023 period and a memorandum of understanding in the field of diplomatic training.

The memorandum of understanding establishes a framework for sustainable cooperation in the training of young diplomats and provides for sharing experiences and information in the fields of diplomacy and international relations.

The Haitian official underlined on this occasion that a “bright future opens up to cooperation for the benefit of the two countries’ populations,” while Bourita dwelled at length on the role the Kingdom plays on the diplomatic level, thanks to the foresight of King Mohammed VI.

North Africa Post's news desk is composed of journalists and editors, who are constantly working to provide new and accurate stories to NAP readers.
NEWER POSTSahara: Undivided map of Morocco officially adopted by the USA
OLDER POSTMorocco poised to tilt arms balance in its favor after deal with US and Israel