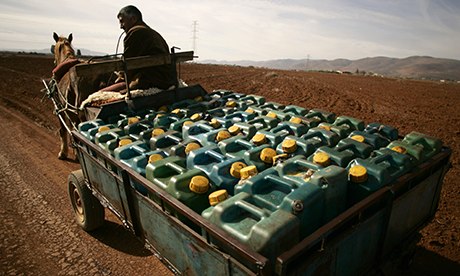 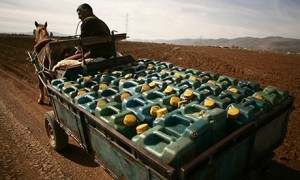 Over the past thirty years, the inhabitants of Moroccan Oriental province have enjoyed unlimited cross-border ‘trade’ in petrol with neighboring Algeria. All-purpose petrol smuggling has been thriving even though the border has been officially closed since 1994 due to the murder of two Spanish tourists, who were allegedly killed by Algerian extremists. The border crossing of Zouj Bghal is definitely closed, but just a few kilometers away, trade routes have been established marketing anything from milk through Turkish-made clothes to petrol.
This summer Algerian government decided to circumscribe this “petrol trade” from the Oriental province. Under current conditions, only petrol-loaded donkeys are allowed, but the prices have tremendously increased since the ban. Moreover, Algerians have been reported to shoot on Moroccan animals carrying fuel and some claim that ditches are being dug in order to prevent smugglers from trading. The situation has become so serious that the Algerian government met last month to discuss oil smuggling. Even President Abdelaziz Bouteflika attended, which was his first cabinet meeting for almost a year due to his poor health.
Although the unexpected cabinet meeting was officially summoned with the aim to deal with the security issues regarding oil smuggling, rumors has it that the true reason is somewhat more commonplace. In the light of the upcoming elections, the government wants to ensure a better management of natural resources including oil. The cross-border smuggling of petrol costs Algiers lots of money, not to mention decreasing petrol reserves, which sometimes results in shortages in a country otherwise abundant in oil. Petrol indeed supposed to be a special case. According to the chief of the Association for the Protection of Oriental Consumers (APCO), Mohammed Benkaddour, about 3,000 to 5,000 families are involved in petrol smuggling. The border provinces in Algeria and Morocco belong to poorest in both countries and face high unemployment. The backbone of the cross-border petrol smuggling is reportedly a developed network of befriended families from both sides of the border, who often live off smuggling.

North Africa Post's news desk is composed of journalists and editors, who are constantly working to provide new and accurate stories to NAP readers.
NEWER POSTThe Africa-Arab summit and the Kuwait Declaration
OLDER POSTObama Urged to Build on Alliance with Morocco to Face Challenges in North Africa, Sahel