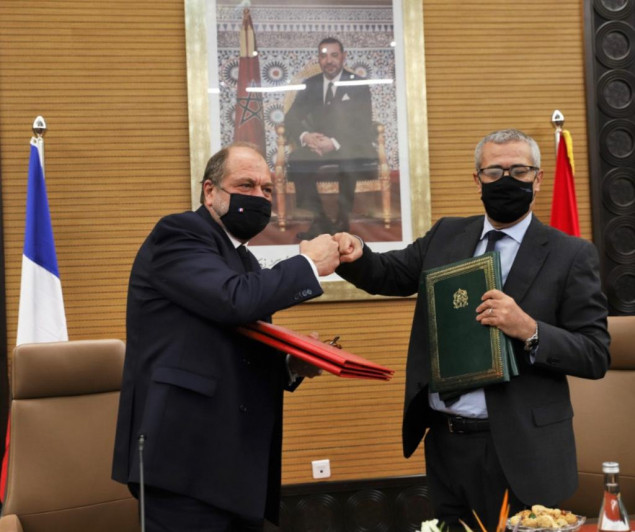 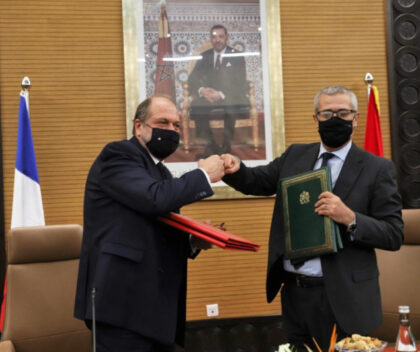 French justice minister Eric Dupond-Moretti has hailed the efficient judicial cooperation between France and Morocco in the fight against terrorism.

This excellent cooperation has proven its efficiency “in a platform gathering also Belgium and Spain”, said the French official after the talks he held Monday in Rabat with Head of Morocco’s Public Prosecutor’s Office, Mohamed Abdennabaoui.

He stressed the importance of working together to combat crimes and address the issue of unaccompanied minors through the exchange of information and clear procedures enabling the two countries’ magistrates to make appropriate decisions.

For his part, Mr. Abdennabaoui said his meeting with Eric Dupond-Moretti focused on the issue of unaccompanied Moroccan minors in France, bilateral cooperation and several other issues of common interests.

During his visit to the Kingdom, the French justice minister also conferred with Interior minister Abdelaoufi Laftit and signed with Moroccan peer Mohamed Benabdelkader a cooperation agreement on the situation of Moroccan unaccompanied minors.

The agreement will facilitate the exchange of information and will help set measures for solving a problem shared by the two countries, said Dupond-Moretti, noting that the protection of minors is a priority for both Morocco and France.

He also thanked Morocco for helping French authorities to identify the “unaccompanied minors because without identification, no legal action can be possible.”

The Moroccan justice minister said the agreement sets the legislative framework governing the action of magistrates, public prosecutors and social workers in dealing with the issue of minors in accordance with the UN convention on children’s rights.

North Africa Post's news desk is composed of journalists and editors, who are constantly working to provide new and accurate stories to NAP readers.
NEWER POSTRabat remains attached to ceasefire but will react firmly against threats to its security
OLDER POSTDominican Republic joins worldwide support for Morocco against Polisario provocations