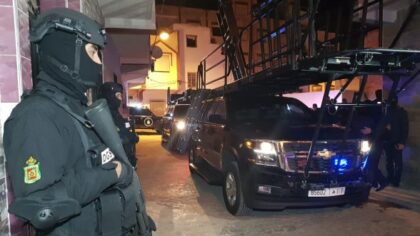 The men, aged between 21 and 38, were arrested in two different operations, in two districts.

The three members pledged allegiance to ISIS in a video that proves their orientation, according to Medi1 TV. The footage shows the arrestees vowing to carry out terrorist attacks to undermine Morocco’s security and stability.

Investigations enabled to identify a location in the Old City of tetouan which was used as a safe house by the cell’s members to hold meetings and plan for their terrorist schemes, the BCIJ said in a press release.

Searches conducted at this house as well as at the homes of the suspects led to the seizure of an ISIS banner, a text of allegiance to the alleged caliph of this organization, bladed weapons of various types and sizes, as well as information and electronic devices.

Searches also led to the seizure of chemical equipment used in the manufacture of improvised explosive devices, including bags containing sulfur and phosphorous, barrels containing gasoline fuel and large quantities of screws and metal pellets, electrical wires and electronic batteries, empty glass bottles probably destined to prepare Molotov cocktails, and suspicious liquid materials which will be submitted to the Forensic Police Laboratory.

According to initial investigations, the members of this terrorist cell have reached an advanced stage in the preparation of their terrorist projects.

Investigations also revealed that the suspects made several exploratory visits to identify the targets to be attacked with improvised explosive devices or using terrorist methods as those used by ISIS fighters.

The BCIJ is the kingdom’s most powerful counter-terrorism agency. Established in 2015, it monitors security threats across the country and cooperates closely with several foreign countries in combatting terrorism.