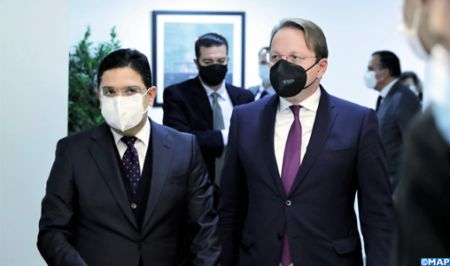 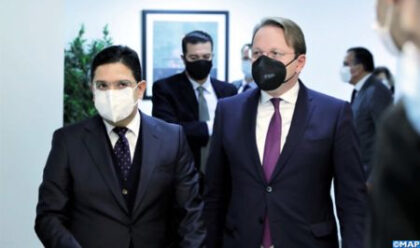 Morocco has called on the European Union to support the Mohammed VI Fund for Investment, set up to help bolster the economy, stimulate productive activities and prop up major public-private investment projects in various sectors in the post-covid era.

The call was made by economy minister Mohamed Benchaaboun during a meeting held Tuesday with visiting EU Commissioner for Neighborhood Oliver Varhelyi.

The contribution of EU in the Mohammed VI Fund for Investment, which is part of Morocco’s post covid-19 economic recovery plan, would support European investors operating in the North African Kingdom and help the European bloc diversify its supply chain as the global health crisis has exposed the vulnerabilities in the production strategies and supply chains in the world, said Benchaaboun

In partnership with the private sector, the Fund will support industrial restructuring, innovation, growth activities, SMEs, infrastructure, agriculture and tourism, explained the minister.

Varhelyi voiced the EU’s willingness to continue to support Morocco, noting that the implementation of the European “Development Plan for the South” within the framework of the European Neighborhood Policy is an opportunity to further enhance the “exemplary relations” existing between the two partners, Morocco and the EU.

Morocco is “credible partner of the European Union”, said the European Commissioner at a joint a press conference with Bourita. He stressed the importance of setting up together an economic plan for deepening the strategic bilateral partnership.

Managing migration “is a common task that must be tackled together. Here, too, Morocco is leading the way. It is a credible partner”, he added.

During the joint press briefing, the Moroccan foreign minister called for the revision and evolution of the European Neighborhood Policy (ENP) launched in 2003 to promote prosperity, stability, and security and prevent division within the EU’s neighbors.

Morocco’s top diplomat has reaffirmed the Kingdom’s commitment to consolidate a “solid, innovative and lasting” partnership across the Mediterranean.

“The Morocco-EU partnership is doing better, it is more responsive, more pragmatic, and in line with the challenges of the moment,” he said.

Minister of Industry and Trade Moulay Hafid Elalamy, who also held talks with the EU commissioner for Neighborhood and Enlargement, Oliver Varhelyi, pointed out that Morocco, a “reliable and safe” country at the gates of Europe represents a competitive relay with a view to the redeployment of some production tools.

Thanks to the Kingdom’s geographical proximity, reduced logistics costs and other comparative advantages, as well as the reduction of the environmental footprint of the supply chain, this competitive relay would enable the duplication of production management tools, Elalamy told reporters following talks with Olivér Várhelyi.

He called on European industrialists to continue and accelerate their development in Morocco within the framework of new regional value chains, stressing that the Kingdom, whose production fabric has shown agility and remarkable resilience during the COVID crisis, seeks to play a leading role in the establishment of regional value chains at the Euro-Mediterranean level.

Morocco, which has taken important steps in its energy transition, is resolutely committed to the green transition of its economy, he said, underlining that low-carbon and circular industry are a cornerstone in the Moroccan industrial recovery plan.

Commissioner for Home Affairs Ylva Johansson who was also on a visit to Rabat Tuesday held meetings with a number of Moroccan officials, including Bourita, and Minister of the Interior Abdelouafi Laftit.

Her trip schedule includes visits to several EU-funded projects in the field of labor migration and integration of migrants. Visits to the Mohammed VI Institute for Imams Training in Rabat and Morocco’s border management activities in Tangier are also planned.