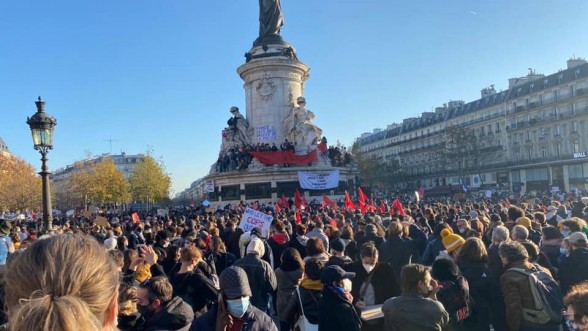 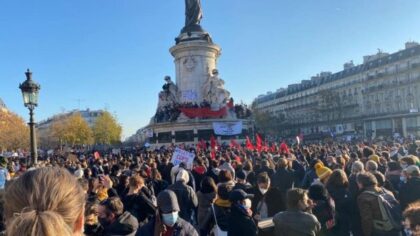 The members of the Moroccan community settled in France staged Saturday at Place de la République in Paris a demonstration to condemn the Polisario’s acts of banditry in Guerguarat, and to express support for the Moroccan army’s intervention to secure the free movement of people and goods at the crossing point between Morocco and Mauritania.

The Moroccan diaspora expressed support to Morocco’s territorial integrity and to the Sahara as being an integral part of the kingdom.

Waving the national flag and portraits of King Mohammed VI, initiator of the autonomy project in the Sahara, and of the late Hassan II, craftsman of the Green March, the participants in the demonstration hailed as just and courageous the Kingdom’s decision that made it possible to lift the serious three-week blockade of the crossing point and to restore order and security in this strategic area.

Singing the national anthem and patriotic songs, the diaspora expressed solidarity with the motherland, conveying thus to the French public opinion the message of peace and wisdom advocated by Morocco for the settlement of the artificial dispute around its Saharan provinces.

At the same time, they denounced the recurring maneuvers of the Polisario militias aimed at harming the Kingdom’s stability and security.

Representatives of several associations of Moroccans in France reiterated their mobilization to defeat all the plots hatched by the Polisario separatists in an attempt to undermine the efforts made by Morocco to reach a political solution to the Sahara dispute and to promote the social and economic development of the Sahara provinces.

Similar demonstrations by the Moroccan diaspora were held in other European countries, including in Spain and Denmark.