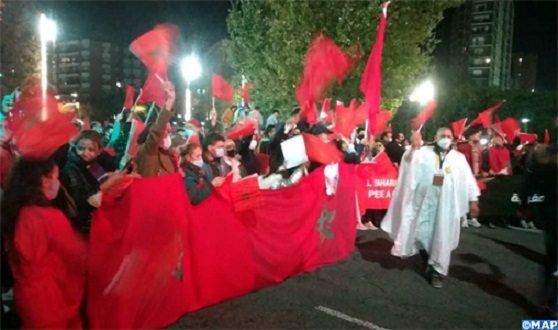 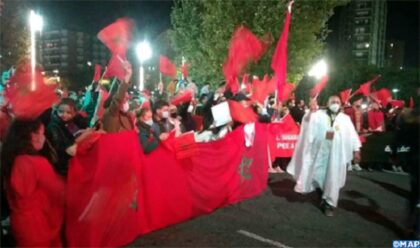 After the global outpouring of solidarity and support to Morocco’s territorial integrity and action against the polisario mercenaries’ obstruction of the Guerguarat crossing point, the Moroccan diaspora in several countries as well as Jews of Moroccan origin have voiced their strong backing to Morocco’s sovereignty over the Sahara and its actions at Guerguarat to ensure the region’s stability.

Moroccans settled in Denmark and Spain staged demonstrations to condemn Polisario’s acts of banditry in Guerguarat, which caused a serious three-week blockade of the crossing point between Morocco and Mauritania, and to express support for Morocco’s territorial integrity.

On Tuesday, Jews of Moroccan origin living in Ashdod, one of Israel’s largest cities, organized a demonstration of solidarity with the North African Kingdom, and voiced their strong backing to Morocco’s sovereignty over the Sahara.

As shown in a video largely circulated on social media, the Moroccan Jews of Ashdod reaffirmed their unwavering backing to the Moroccanness of the Sahara and to the Kingdom’s territorial integrity.

During the demonstration, they chanted slogans supporting Morocco’s sovereignty over its Sahara and paying tribute to the farsighted leadership of King Mohammed VI. They also sang “Green March” patriotic songs.

In Catalonia, hundreds of Moroccans living in Tarragona also took to the streets on Tuesday to express support to the “legitimate” action carried out by the Moroccan army to end the three-week long blockade by Polisario militias of the Guerguarat crossing point.

Human rights activists, politicians, and representatives from more than 20 Moroccan associations active in the Catalonia region as well as representatives of some local Spanish political parties and many Spanish nationals took part in the huge demonstration, which also served as an act to condemn Polisario supporters’ vandalism against the Moroccan consulate in Valencia in violation of international law.

A group of Polisario supporters stormed the consulate on November 15 and removed the Moroccan flag in an attempt to hoist the separatists’ ensign.

Morocco and Spain had strongly condemned this act of violence and vandalism.

The participants in the Tarragona demonstration waved Moroccan flags and chanted slogans to express support for their country.

In Denmark, several Moroccans also organized a protest on Tuesday in Copenhagen expressing their mobilization and readiness to defend their country’s interest.

The participants also expressed unconditional support for Morocco’s action to restore order and security in the buffer zone of Guerguarat.

Ahmed Ould Labchir, a former member of Morocco’s Liberation Army and former member of the Royal Armed Forces, who was participating in the demonstration in Copenhagen, told MAP correspondent that Moroccans will not accept anything other than Morocco’s Autonomy Plan as a solution to the Sahara conflict.

“We cannot accept any other alternative” to the unity of Morocco, he said.

MAP also quoted Danish lawyer Laue Traberg Smidt, who said that the dispute over the Sahara is a “question which should be dealt with, without any political overbidding, within the United Nations.”

The lawyer also condemned how Algeria denied him access to the Tindouf camps, unlike Morocco, he said, which “opened me its doors to do my work.”