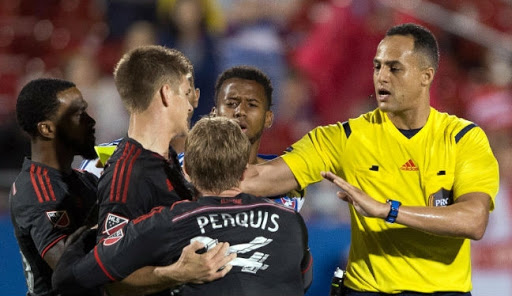 Moroccan born American referee Ismail Elfath has earned the Major League Soccer Referee of the year award, the first ever recognition in his career.
The Casablanca-born 38-year old man was nominated by the Professional Referee Organization, the award promotor.
Elfath was in competition with three others and the candidates were voted on by MLS club technical staff, media and MLS players.
First runner-up is Joe Dickerson who got 28.93 per cent of all votes while second runner-up, Jair Marrufo only landed 20.04 per cent of the votes.
He was nominated for the award in 2013 and 2017 but failed in the two attempts.
Elfath has under his belt 60 total career referee assignments, including the MLS All-Star Game (2015), Audi MLS Cup Playoffs Conference Finals (2015, 2017), FIFA Under-20 World Cup Final (2019), FIFA Club World Cup (2019) and Concacaf Gold Cup (2019), mlssoccer.com reports.
He started his career in 2012.

North Africa Post's news desk is composed of journalists and editors, who are constantly working to provide new and accurate stories to NAP readers.
NEWER POSTTwo Spanish lawmakers charged in connection with corruption practices in Algeria
OLDER POSTLibya signs up for Airbus helicopters to combat criminality