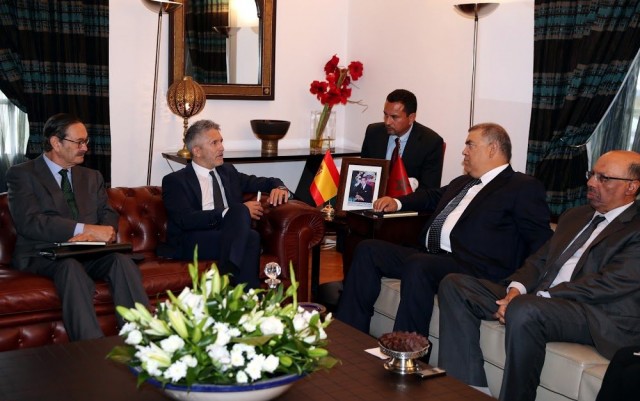 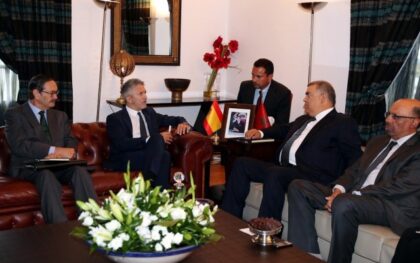 The fight against illegal migration and organized crime was at the center of a meeting held Friday in Rabat by the Spanish and Moroccan Interior Ministers, Fernando Grande-Marlaska and Abdelouafi Laftit.

Speaking to the media after the meeting, Fernando Grande-Marlaska renewed satisfaction over Spain’s cooperation with Morocco, which covers many areas, especially the fight against terrorism, irregular migration, and organized crime.

Bilateral cooperation is “marked by mutual trust,” and coordination between the two countries is currently “at its best,” the Spanish official said.

“Today’s meeting once again highlights the extraordinary coordination and mutual trust between our respective teams. It is an almost unbeatable relationship,” said the Spanish Minister of the Interior.

The two officials stressed the need to increase collaboration in the various areas of migration policy, such as control of the flow, exchange of police information, and joint operations against criminal organizations engaged in trafficking in human beings.

The Spanish official who visited Morocco as the Canary Islands witnessed a rise in the number of incoming irregular migrants highlighted the current situation in the Spanish Archipelago, underlining that the Atlantic road “is a dangerous and difficult road where people are losing their lives”.

He said the two parties set up, during the Friday meeting, many measures aimed at continuing their action in the fight against illegal migration and organized crime.

“In order to manage this migratory pressure, joint work and mutual support between Spain and Morocco are essential,” said Grande-Marlaska.

Also, the big challenge for both countries is to adapt the measures to the coronavirus pandemic. “We have addressed issues such as terrorism, organized crime, illegal immigration and the situation in the Canary Islands. All this by adapting our measures to the circumstances of the pandemic,” said Grande-Marlaska.

These measures fall within the framework of the new situation, concerning in particular the Atlantic littoral, he said, adding that the two countries scored an important success in the fight against illegal migration and criminal organizations.

Fernando Grande-Marlaska’s official visit to Morocco is the seventh of its kind since he took office as the Spanish Interior Minister in June 2018.

On several occasions, Spain has expressed satisfaction with Morocco’s measures to counter irregular migration, emphasizing that Rabat’s efforts have helped Madrid to halve the number of arrivals of irregular migrants.

North Africa Post's news desk is composed of journalists and editors, who are constantly working to provide new and accurate stories to NAP readers.
NEWER POSTLiberia reaffirms solidarity with Morocco, support for its national cause
OLDER POSTMorocco, Mauritania resolved to bolster their cooperation and expand its scope