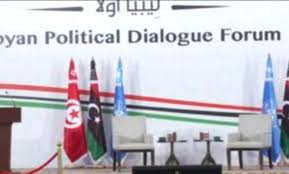 Libyan factions meet in Tunis to design roadmap to elections

Libya’s rival factions began much-awaited political peace talks in Tunisia’s capital on Monday, under the aegis of the United Nations, in an attempt to end the political chaos in the North African country.

The purpose of the six-day forum consists mainly is drawing a roadmap to presidential and parliamentary elections and choosing a new authority for the oil-rich North African.

Head of the GNA Faiez Serraj is expected to resign following the nomination of the new authority.

Serraj, who had promised to step down end of October in a bid to make room for new national leadership, last week withdrew his resignation following urges from the HCS and several foreign countries and entities, to avoid a power vacuum.

The Tunis forum is attended by 75 delegates picked by the UN from the Tripoli-based High Council of State(HCS), aligned with Government of National Accord (GNA); the Libyan House of Representatives (HoR), backed by the east-based government; and civil society activists. The participants will have to agree on a joint authority to lead the country towards elections whose timeline have to be decided.

The top UN official in Libya, Stephanie Williams, told journalists Sunday night that “Libya now has an excellent opportunity which will allow it to get out of the conflict tunnel, if all the interlocutors assume their responsibilities and respect their commitments at the end of this dialogue.”

The Tunis dialogue is the epilogue of a series of UN-backed rounds of talks between the Libyan sides which took place in several places including Geneva, Germany and Morocco.

In Morocco, HoR and HCS delegations agreed to share state institutions as part of the formation of a joint administration.

The UN is pushing for elections Libya to end years of chaos that engulfed the North African nation after the overthrow and killing of Moammar Gadhafi during a NATO-backed revolution in 2011.

The GNA and rival administration in Beida have been vying for the control of the country with the backing of an array of local militias, as well as regional and foreign powers. Turkey and Qatar are propping up the Tripoli frail government, while Egypt, UAE, Saudi Arabia, Russia and France are backing the other camp.