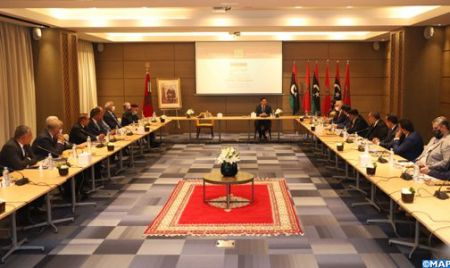 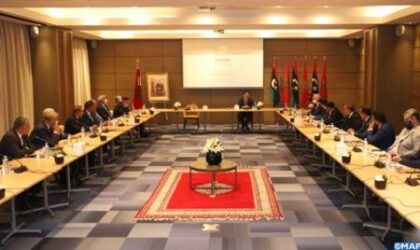 A third round of talks between Libyan delegations from the Tripoli-based High Council of State and the Parliament of Tobruk was held in Bouznika, Morocco, this Nov. 4-5.

The consultation session is part of the Libyan parties’ preparation for discussions set later this month in Tunisia.

In a joint statement read out at the end of this meeting, the participants expressed “their sincere gratitude and thanks to the brotherly Kingdom of Morocco for its hospitality and the valuable efforts it is making to help the Libyans overcome the difficult stage the country is going through.”

During this meeting, emphasis was laid on “the importance of the political dialogue and our readiness to support this process and strengthen its chances of success,” the statement said.

The two parties to the dialogue also affirmed the importance for the High Council of State and the House of Representatives “to shoulder the responsibility of maintaining the democratic path and to embodying the full Libyan ownership of the political process, with the aim of achieving the expected objectives of dialogue, on top of which the unification of state institutions and allowing the executive power to pave the way for the holding of legislative and presidential elections on a constitutional basis,” added the document.

The meeting also discussed a series of questions, the most important of which is related to the mode of management of the inter-Libyan dialogue, which is a “purely Libyan property”, the statement underlined, adding that the two parties have agreed on the decision-making mechanisms through the political dialogue, and the legal and professional criteria for appointments to senior positions in the executive power, in addition to the priorities of the action of this power during the preliminary stage.

“The Bouznika dialogue opened a positive dynamic, which crystallized in other meetings and resulted in positive results. We have gone from pessimism to hope,” Morocco’s Foreign Minister Nasser Bourita said Thursday, during the third round of talks.

“Morocco has a strong conviction that the High Council of State and the Libyan House of Representatives, with their territorial and popular legitimacy, are essential to achieve a solution to the Libyan crisis,” he underlined.

The two previous rounds of talks in Bouznika September 6-10 and October 2-6 enabled the two delegations to reach a comprehensive agreement on the criteria and mechanisms for appointments to positions of sovereignty.

Prior to the third round, the Moroccan Foreign Minister received separately in Rabat the President of the Libyan High Council of State Khaled Al Mechri, and the Speaker of the Libyan House of Representatives Aguila Saleh, who both emphasized the importance of the Bouznika dialogue.

Khaled Al Mishri said the discussions freed Libya from a deadlock, while Aguila Saleh Issa, who also expressed appreciation for the talks, said the Libyan parties were satisfied with the results of Morocco’s initiative.

As put by Salah, Morocco has been engaged, since the process of Skhirat, to offer the Libyans all the possible opportunities to reach solutions and made “great efforts” to support the political solution in Libya.

Al Mechri had emphasized, also in Rabat, the positive role played by the Kingdom, saying its significant efforts made it possible to reach agreements in Bouznika.

The delegations participating in the Bouznika talks vowed to continue discussions in order to reach a “global consensus” on the positions of sovereignty in accordance with Article 15 of the Skhirat Agreement of December 2015.

Morocco, under the aegis of the UN, spearheaded the Skhirat Agreement, which provides the framework for negotiating a political settlement to the Libyan conflict.

By hosting a third round of talks in Bouznika, Morocco consolidates its key role in promoting stability in Libya and in the greater Maghreb region.

Since the start of the Bouznika talks, the United Nations expressed “appreciation” for Morocco’s efforts to bring Libyans around the negotiating table for a political solution to the crisis in Libya.

The World body also welcomed the understandings reached by the 2nd round of the inter-Libyan dialogue in Bouznika.

The same appreciation was voiced by the European Union, the Arab League, the CenSad, and several countries.

The “constructive and active” role of Morocco in the facilitation of the Libyan dialogue has been welcomed by the Western and Arab capitals as well as by several international and regional blocs, including the European Union, and the Arab League.