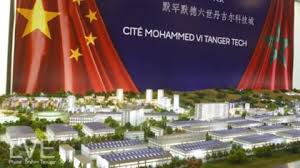 Under the deals inked remotely on Tuesday, the Chinese corporations will hold 35 pc of the capital of the Tangier Tech Development Company (SATT), which is tasked with building & managing the smart city launched by the Moroccan Sovereign in March 2017.

Chinese company Aeolon, one of the world’s leading manufacturers of wind blades, has already announced its intention to set up a plant in the Mohammed VI Tangier Tech City. The production facility will cost the company $140 million and contribute to the creation of over 2,000 job openings.

Other Chinese firms operating in automotive, aerospace, textile, electronics machinery…, are also planning to install their factories in the City.

This ambitious project is expected to attract investments worth $10bn as the Moroccan authorities offer competitive package including tax incentives to businesses operating in food industries, automotive, aeronautical, renewable energy, chemical and textile.