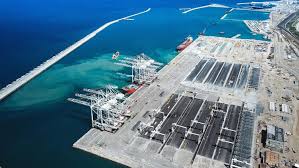 The managers of the ports of Tanger-Med (Morocco) and Hamburg (Germany) have agreed to share experiences in ports & vessels operations, digitalization, traffic management, ports cyber security, IT data exchange and Innovation.

Speaking during the signing ceremony, Mr. Meier said “both ports occupy outstanding positions in their regions. In this way, both sides will benefit strongly from an active partnership, especially when it comes to exchanges on questions about digitization or port cyber security”.
For his part, Mr. Riffi said : “We are delighted to start this cooperation scheme bringing together Hamburg Port Authority and Tanger Med Port Authority on important subjects related to port competitiveness, digitalization and innovation”.

Tanger-Med is connected to more than 180 ports worldwide and offers handling capacities of 9 million containers.

In 2019, Port of Hamburg handled 1.3 million tons of cargo in seaborne trade with Morocco, which constitutes an increase of 62.2 percent compared with the previous year.

Morocco is Hamburg’s leading trading partner in direct trade with Africa. A total of nine liner services connect the port of Hamburg with Morocco.

Tanger Med is the 1st container transshipment port in the Mediterranean and the leading container port in Africa, according to latest “Lloyd’s Listing”.

The Tanger Med Special Agency announced in its recently-published October newsletter that the European Sea Ports Organization (ESPO) has renewed the “Ecoports” label of the Tanger Med Port, for the year 2020.

The label testifies to the port’s compliance with environmental standards, as defined by the British maritime classification company Lloyd’s Register.

According to the label, the Tanger Med Port is eco-friendly with a compliant environmental management program. It addresses the quality of water, air, and soil, waste recycling, and the preservation of natural resources.