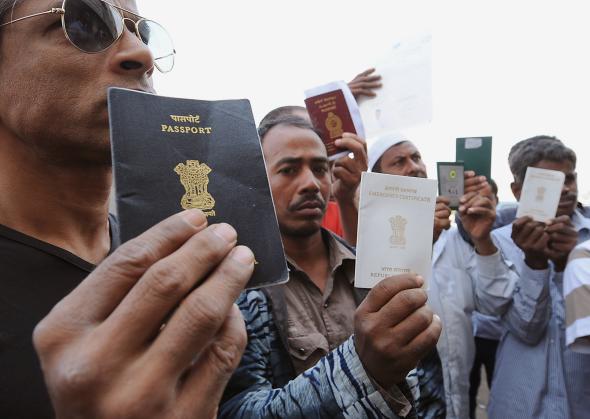 Saudi Arabia rounded up thousands of newcomer workers following the expiration of an amnesty introducing new employment rules. It is estimated that about a million of Indians, Pakistanis, Bangladeshis, Filipinos, Nepalese, and Yemenis have left the country in the last three months in contrast to four millions of other workers who managed to get a work permit before Sunday deadline. Moreover, about three thousand of Indonesians are being held in detention in Jeddah waiting for deportation.
According to available statistics, there are approximately nine million migrant workers in the country, which is about a half of the workforce. They are employed in all sectors of economy, including services and clerical jobs. Although Saudi Arabia is the biggest economy of the Arab world, it faces domestic unemployment rate of about 12%, which was the main impetus for a new migrant law. The government has also stated that illegal migrants who will stay in the country will face harsh fines, jail and deportation if caught. Moreover, firms that will be found employing migrants without work permit will be also fined.
The independent think-tank ‘Human Rights Watch’ described the country’s labor system as abusive saying that “employers often abuse power in violation of Saudi law to confiscate passports, withhold wages and force migrants to work against their will or on exploitative terms.“ Moreover, the sponsorship system in Saudi Arabia – kafala – ties residency of a worker to sponsoring employers, who must agree every time a migrant worker wants to chase a job or leave Saudi Arabia.