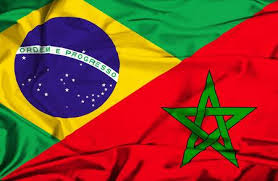 Speaking at an economic forum bringing together Brazil and Arab countries, Bolsonaro stressed the key role played by Morocco in promoting Brazil’s agriculture citing that the north African Kingdom remains the main supplier of his country with fertilizers.

Morocco and Brazil have signed in 2019 an agreement to facilitate investments, he said.

These relations received a boost following the visit of King Mohammed VI to Brazil in 2004, as part of a tour in Latin America.

In 1884, Brazil had already opened a consulate in Tangier, then an international centre of commerce. In 1906, Brazil’s Plenipotentiary Minister in Lisbon presented his credentials to Sultan Moulay Abdelaziz of Morocco. Full diplomatic relations were established when Brazil appointed an ambassador in Rabat in 1962. Five years later, in 1967, Morocco opened an embassy in Rio de Janeiro, Brazil’s former capital.

The two countries signed in 1999 a Memorandum of Understanding on political consultations between their respective Ministries of Foreign Affairs.