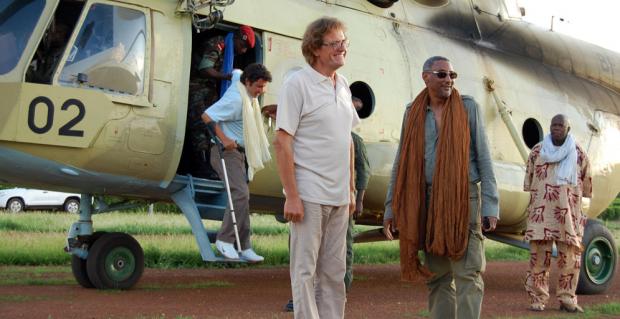 After eleven years of exile, Mauritanian opponent and politician Moustapha Ould Limam Chafi returned to the country Sunday evening on board a private jet from Doha, the capital of Qatar, his place of residence for several years. He was the subject of an international arrest warrant issued against him in 2011 by the regime of former Mauritanian President Mohamed Ould Abdelaziz. Limam Chafi, who had asked to avoid all gatherings due to the Covid-19 pandemic, was not heard, and a crowd of his supporters greeted him at Nouakchott International Airport.
Among those present, Limam Chafi found friends, former political exiles. One from the Ould Abdelaziz era, businessman and billionaire Mohamed Ould Bouamatou. Returning last month after the lifting of warrants in February, he too was the target of an arrest warrant issued by the regime of the former Mauritanian president. The other was former army commander Saleh Ould Hanena, who had led a military insurgency against former president Ould Taya in 2003.
For the latter, this return is synonymous with a new page for Mauritania: “We think it is a new page that opens in which all Mauritanians will have their place. Among his very best sons, Limam Chafi, will take his place in Mauritania. Limam’s place is at home».

Limam Chafi declared himself happy to be back with his family. The former head of state Mohamed Ould Abdelaziz accused him of having dubious relations with the jihadist nebula in the Sahel. A fictitious accusation, according to the opponent, who sees another reason for this conflict: “All these accusations are rather false accusations. Everyone knows that my only problem with the previous government is my opposition to the coup d’état and my refusal to accompany a seizure of power by force of arms».

Limam Chafi had led a campaign against the ousting of former President Ould Cheikh Abdallahi on August 6, 2008.