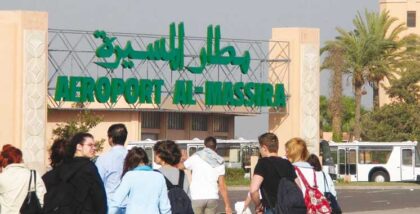 A group of British tourists landed Saturday in the coastal city of Agadir, becoming the first batch of international holiday makers to visit the North African country since March owing to the covid-19 pandemic.
Low-cost airline Ryanair, Aujoud’hui.ma reports, landed at the city airport of Al Massira with the visitors welcomed by local tourism and state officials.
The size of the group has not been revealed but is significant in the eyes of the authorities who hope the Saturday arrival will spur additional visits to the kingdom known among the top three African destinations, aside from Egypt and South Africa.
Morocco welcomed 13 million international arrivals last year.
The Kingdom lost more 18.3 billion dirhams ($2 bln) as of September (down 90.1% compared to last year) after it closed its borders in March because of the pandemic.
Tourism accounts for 7 per cent of the country’s GDP and employs directly more than 500,000 people.
In August to weather the crisis, the country unveiled a public-private deal covering 2020-2022. The plan, reportedly, will help restore 2019 levels in two years through direct aid to the sector including through maintaining social support measures.
Employees who happened to lose their jobs as a result of the pandemic will continue to receive a stipend of 2000 dirhams ($200) monthly. Additionally, operators will also benefit from a postponement of tax and loan payments as well as easy access to bank loans.