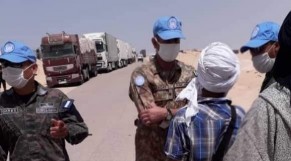 Polisario militia leader Ibrahim Ghali has bluntly announced that his men are ready to sap the UN peace process by threatening to block Morocco’s border crossing with Mauritania known as El Guerguarat, adding in a pitiful monologue that the separatist group was ready to go back to war.

The very fact of sending armed men to the buffer zone east of the Morocco-built security wall is a violation of the 1991 ceasefire agreement, which provides for the demilitarization of the area.

The UN had on multiple occasions warned the Algerian-backed separatist front from any attempt at altering the status quo by sending troops or setting up civilian or military installations.

Head of the Polisario separatists did not chew his words. He evoked a reproduction of the Gdim Izik events where infiltrated Polisario activists killed dozens of Moroccan security forces.

Ghali, who was speaking at an interview on Algerian state television, warned the UN mission in the Sahara (MINURSO) and threatened to forge ahead with his plan to block the crossing in a desperate attempt to distract attention from the widening cracks within the polisario edifice and the inhumane conditions prevailing in the Tindouf camps.

The warmonger added that only bloodshed will make their separatist cause resurface in global politics.

For now, the Polisario and its mentor Algeria have clearly reiterated their real intentions to resume war, sap the UN process and voiced disregard for peace efforts. The MINURSO should assume its responsibilities and prepare for an irredentist move from the separatists.

Observers have also warned that Algeria might seek to distract attention from its domestic woes by greenlighting a Polisario incursion into the demilitarized area.

Polisario provocations also come after a series of setbacks including Morocco’s return to the African Union and increasing support for its territorial integrity in the continent.

Morocco made it clear that any attempt to alter the status quo or block the Guerguarat crossing would amount to a casus belli triggering a commensurate response.

North Africa Post's news desk is composed of journalists and editors, who are constantly working to provide new and accurate stories to NAP readers.
NEWER POSTSahara: UN Chief reaffirms the fundamentals of the political solution
OLDER POSTInter-Libyan dialogue: Second round of talks starts in Bouznika