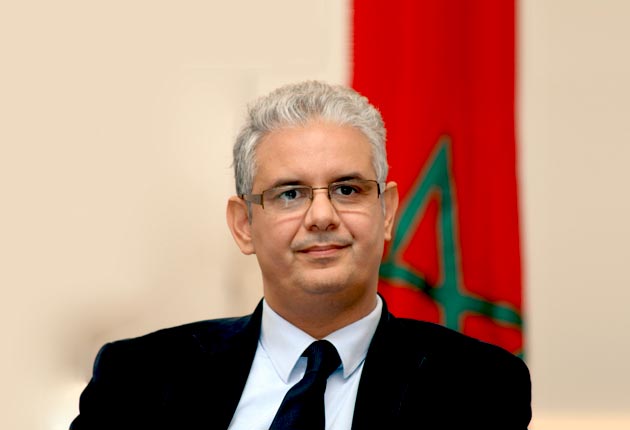 After he had been elected best Finance Minister for the MENA region for 2012 and Minister of Finance of the year 2012 by the «The Banker», a magazine of the Financial Times press group, Morocco’s former Minister of Economy and Finance, Nizar Baraka, earned another consecration in 2013, this time from the World Bank and the International Monetary Fund.
“Emerging Markets”, reference magazine of the World Bank and the International Monetary Fund, has actually elected Nizar Baraka, “Minister of Finance of the Year for the Middle East and North Africa in 2013.”
The prize awarding ceremony took place on Saturday night in Washington on the sidelines of the Annual Meetings of the IMF and World Bank (10-13).
Nizar Baraka was awarded the prize in recognition of “his dedication and effectiveness in managing Morocco’s finances in a difficult juncture,” the ceremony organizers said. This distinction also translates “the confidence enjoyed by Baraka from economists and the financial and economic community at large.”
Nizar Baraka was praised by analysts for his country’s progress over the past year, despite unfavourable external and domestic conditions. Stability was one of the issues that experts said was an advantage for Morocco’s government, compared with others in the region, wrote Emerging maerkets on its website.
William Jackson, an emerging markets analyst with Capital Economics, says that cutting subsidies – which eat into government revenue, pushing budget deficits higher – is a problem in most of North Africa, but that Morocco “seems to be the most active and committed to do this” among the countries in the region.
Another analyst, Angus Blair, president of the Signet Institute – a Cairo-based think-tank looking at business conditions in the Middle East and North Africa – recognized the Morocco finance minister for his hard work. Baraka had to “do more with less,” he commented.
Last year, conditions deteriorated for Morocco’s economy. Growth slowed to 2.7% from 2011’s healthy 5%, and both deficits widened substantially. The country’s external deficit was 10%, and its budget deficit was 7.6% in 2012, the magazine pointed out.
The magazine which also recalled the $6.2 billion precautionary and liquidity line (PLL) loan approved by the IMF in August 2012 stated that in the second review of the accord, published in September this year, IMF experts say said that economic growth was likely to outperform in 2013 due to a stronger agriculture sector.
IMF expects growth to stand above 5% in 2013, although non-primary GDP growth is decelerating and notes that “both the fiscal and external positions have been improving so far in 2013, partly reflecting lower international commodity prices.”
The IMF on the other hand praised Moroccan authorities for having taken the fiscal slippages recorded last year seriously and for having “responded with significant actions to strengthen their fiscal framework and reduce the impact of world commodity price fluctuations on the budget.”
Analysts note that much of these performances were achieved while Baraka was still Minister of Economy and Finance, a portfolio he held from January 2012 to July 2013, when he handed in his resignation after his party, the Istiqlal Party, decided to withdraw from the coalition government led by Abdelilah Benkirane’s Party of Justice and Development (PJD.)
Nizar Baraka, born in February 1964 in Rabat, is a Moroccan politician and economist. Holder of a Ph.D in economy from l’Université d’Aix-Marseille, he is a staunch militant of the nationalist Istiqlal Party.
Under the banner of this party, he was appointed junior minister in charge of economic and general affairs in October 2007 in the cabinet led by his party’s leader Abbas El Fassi.
Nizar Baraka served as a Governor of the slamic Development Bank, the African Development Bank, the Arab Monetary Fund, and the European Bank for Reconstruction and Development. He also served as a Trustee of Tanger Mediterranean Special Agency (TMSA).
Unlike several Istiqlali ministers from the El-Fassi cabinet who were not selected to sit in the four-party coalition cabinet formed in January 2012, Nizar Baraka was entrusted with the important portfolio of Economy and Finance, a job he has performed with distinction as evidenced by the titles he gleaned as Minister of Finance of the Year for the Middle East and North Africa in 2012 and 2013.
After his resignation from his ministerial position, Nizar Baraka was appointed president of Morocco’s Economic, Social and Environmental Council (CESE) in August 2013.