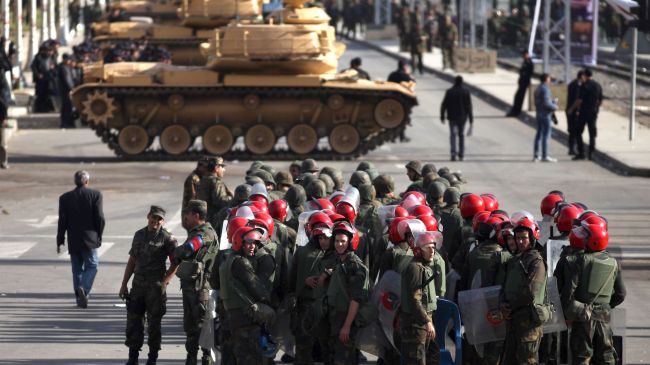 After President Obama gave warning signals to Egypt during his speech at the UN General Assembly about its “inconsistent with inclusive democracy,” he has decided to take actions. The US has reduced its military aid to the country and linked its continuity to “Egypt’s progress in pursuing a more democratic path.” Cairo has not officially reacted to the announcement.
The White House had requested $1,55billion in assistance for Egypt for 2014, $1,3billion of which was for military aid and $250m for economic aid. Although the US failed to determine the extent of the decision, State Department spokeswoman Jen Psaki highlighted that “large-scale military systems” and “cash assistance” will be held back unless “credible progress” is noticed. Health and education assistance, border security and counter terrorism operations will not be affected by the decision.
The announcement could be received as a blow to the military backed interim government while the Muslim Brotherhood could consider it as a morale booster. Before the decision, military shipments and joint exercises with Egypt were suspended.
Psaki said they are interested in seeing Egypt “succeed” and become one of their “strongest” partners when it has an elected civilian government founded on democratic principles. There have been efforts by locals to urge General Al-Sisi to run for presidency despite ruling it out after removing Morsi from power. It seems as if he is considering it lately after telling a local newspaper, Al-Masry Al-Youm, that it could be “Allah’s will.”
The Gulf States are expected to fill the void left by the decision. They have been very supportive to the interim government. Princes of Saudi Arabia have boasted that in the past that they will provide Egypt with more than what US gives it.