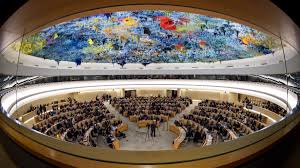 Several countries have reaffirmed, during the 45th session of UN Human Rights Council (HRC) convening in Geneva, their strong support to Morocco’s territorial integrity and commended the serious efforts made by the North African Kingdom for the resolution of the Sahara regional conflict.

In their joint signed statement released Tuesday, 26 countries renewed their firm backing to Morocco’s autonomy plan offered for the Sahara, a plan described by the Security Council as a “serious and credible” basis towards a lasting solution of the Sahara issue.

The joint statement read out by Morocco’s Permanent Representative to the UN Office in Geneva, Omar Zniber, affirmed that “the resolution of this political dispute will help African and Arab peoples achieve their goal of integration and development, a goal to which Morocco is strongly committed.

The signatory countries also recalled the Security Council resolutions praising Morocco’s initiatives made for the promotion of human rights in the Sahara and stressing the need for the registration and conducting a census of people in the polisario-controlled Tindouf camps, Southern Algeria.

They said that Morocco has engaged in a constructive, voluntary and deep interaction with the UN human rights system, in particular the Office of the UN High Commissioner for Human Rights and the special procedures of the UNHRC which paid several visits to Morocco, namely the southern cities of Laayoune and Dakhla wherein the UN officials had free and unrestricted access to all actors, particularly representatives of local civil society.

The Sahara issue is handled by the UN Security Council which is working towards a negotiated political and mutually acceptable solution.

North Africa Post's news desk is composed of journalists and editors, who are constantly working to provide new and accurate stories to NAP readers.
NEWER POSTItaly rebuffs Haftar’s blackmail for Italian fishermen’s release
OLDER POSTMali: The junta reveals its ambition to appoint a military president for the transition