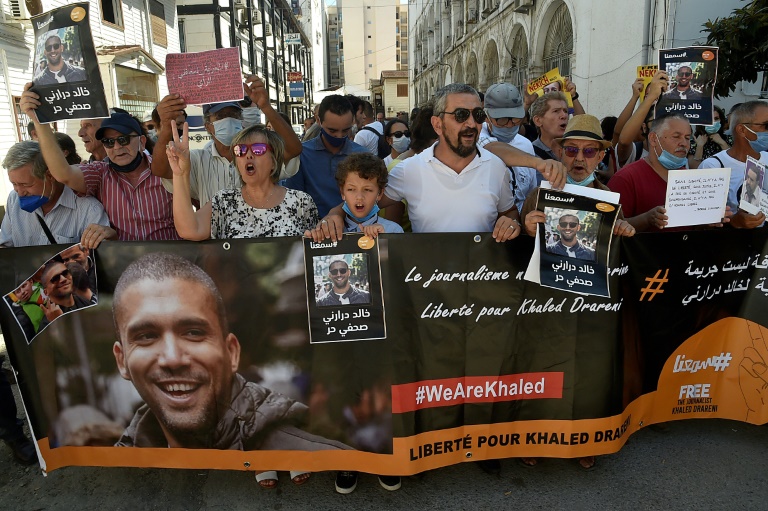 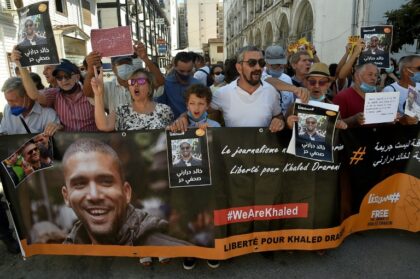 Algerian journalist Khaled Drareni was handed Tuesday a two year- prison sentence on appeal as crackdown on dissent intensifies after months of anti-government demonstrations in Algeria.

Drareni, 40, is the director of the Casbah Tribune, the correspondent of the French TV5 Monde channel and Reporters without Borders in Algeria.
Drareni, who has been held in temporary detention since 29 March, was sentenced for “inciting an unarmed gathering” and “undermining national unity.”

He was also accused of having criticized on Facebook the “corruption and money” of the political system and having published a statement from a political coalition in favor of a general strike, according to RSF.

Drareni was initially sentenced to three years in prison but his sentence was reduced by a year on appeal.

However, his lawyers were shocked that he was not handed a more lenient judgment or an acquittal.

“We are outraged by the blind stubbornness of the Algerian judges who have just condemned (Drareni) to 2 years in prison,” RSF secretary general Christophe Deloire tweeted after the verdict was announced on Tuesday.

“Khaled’s detention proves the regime locks itself into a logic of absurd, unfair and violent repression.”

On Wednesday, United Nations independent experts have called for the release of the journalist, jailed for his coverage of mass protests in Algeria that toppled the North African country’s longtime president Abdelaziz Bouteflika last year.

“We condemn in the strongest possible terms this two-year prison sentence imposed on a journalist who was simply doing his job, and call on the Algerian authorities to reverse it and set Mr Drareni free,” the UN experts were quoted by AFP as saying.

Although the journalist’s sentence was reduced, “it is still grossly inappropriate because the charges brought against him are a blatant violation of freedom of expression, peaceful assembly and of association”, they said.

According to AFP, the eight signatories do not speak for the UN but report their findings to it. They include the special rapporteurs on peaceful assembly, freedom of opinion and human rights defenders, along with members of the UN working group on arbitrary detention.

They said they were alarmed that the Algerian authorities were increasingly using national security laws to prosecute people who were exercising their rights.

“Drareni, and all the others currently in prison, or awaiting trial simply for doing their job and defending human rights must be immediately released and protected,” the experts said.

Khaled Drareni was tried along with Samir Benlarbi and Slimane Hamitouche, two figures of the protest movement known as “Hirak.”
Facing the same charges, Benlarbi and Hamitouche were sentenced to four months in prison and released on time served.

In response to the first three-year prison sentence announced last month, Khaled Drareni’s lawyers and supporters launched a call for international mobilisation to release the journalist who has become a symbol for the struggle for freedom of the press in Algeria.

Several NGOs, including the Committee to Protect Journalists, had also denounced the ruling saying that Khaled Drareni’s only crime was covering the news.

“He should not spend one day in jail for doing his job,” said CPJ Middle East and North Africa Representative Ignacio Miguel Delgado. “This sentence is a sharp move in the wrong direction for Algeria. Authorities should release Drareni immediately, drop all charges against him, and allow him and all journalists to work freely.”