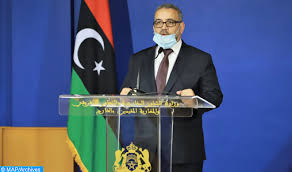 President of the Libyan High Council of State, Khaled Al Mechri, expressed, on Tuesday, gratitude for Morocco’s efforts that ensured the success of the Inter-Libyan dialogue held last week in Bouznika, a coastal city to the south of Rabat.

“We can only express our sincere gratitude and recognition to the Kingdom of Morocco, the King, the government and the people, for the efforts made to ensure the success of these meetings,” Al Mechri said while delivering a speech on the evolution of the inter-Libyan dialogue.

Al Mishri stressed that the Libyan dialogue in Morocco did not aim to favor the ideals of one party over the other. “It was rather a question of defining an appropriate framework to implement Article 15 of the Libyan political agreement, which concerns positions of sovereignty, and to adopt this framework through two institutions: The House of Representatives and the High Council of State,” he explained.

The president of the High Council of State condemned the fake news surrounding the details of the discussions.

This meeting did not address, either directly or indirectly, the names of those who will hold positions of sovereignty, he said, adding that it rather focused on defining an appropriate framework to apply article 15 of the Libyan political agreement on the positions of sovereignty, and on adopting this framework through the House of Representatives and the High Council of State.

Neither the transfer of sovereign institutions outside the capital nor the composition of the Presidential Council and the modalities of selection of its members were mentioned, Al Mechri explained, insisting that “these rumors are an attempt to hinder dialogue. Those who stand in the way of dialogue are the only beneficiaries of the current situation and the persistence of the plight of citizens.”

The delegations of the Libyan High Council of State and the Tobruk Parliament held meeting in Bouznika sept.6 to 10 aimed to preserve the August 20 ceasefire and help the two parties take the first steps towards a resolution to the crisis.

At the end of talks, the two sides issued a joint statement describing the success of the dialogue and thanking Morocco and King Mohammed VI for the initiative. They stressed that Morocco’s assistance will help them overcome the crisis and work towards meeting the Libyan people’s hopes for a peaceful, secure, and stable democracy.

The two parties agreed to further their dialogue at meetings during the last week of this month in order to complete the necessary measures to ensure the implementation and activation of the Bouznika agreement.