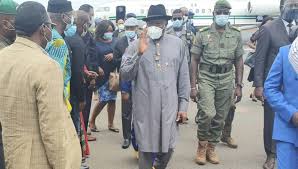 ECOWAS persists and signs: no transitional military president in Mali

The ruling junta in Mali traveled to Accra on Tuesday, September 15, to meet with the delegation of ECOWAS Heads of State. Objective: to convince the West African regional organization to lift economic sanctions and to accompany the transition in the country. But no agreement came out of the meeting.

After a closed-door meeting that lasted several hours, the heads of state of ECOWAS did not accept the proposals presented by the delegation led by the head of the Malian junta, Assimi Goïta. The sub-regional organization reiterated its request for the rapid appointment of a civilian transitional President and Prime Minister. “We hope that we are talking about days and not weeks,” said Ghanaian President Nana Akufo-Addo, also head of the rotating presidency of ECOWAS.

It is only after these appointments that economic sanctions against Mali – the embargo on trade and financial flows and the closure of the country’s borders – will be lifted. A point that Ivorian President Alassane Ouattara stressed at the end of the meeting, saying that Mali could not “stay in this situation for days and weeks”. “It is important for all of us,” he insisted, wishing that a “consensual solution” be found “as soon as possible”.

The ECOWAS mediator, former Nigerian President Goodluck Jonathan, is scheduled to visit Bamako again next week to ensure progress towards the civil transition of the CNSP, the National Council for the Salvation of the People, which was set up by the military to govern the country. According to Burkinabe President Roch Marc Christian Kaboré, the CNSP will have to be dissolved after the transition is installed.

Since the putschites took power and the resignation of President IBK on 18 August, no agreement has yet been reached with ECOWAS. The countries of the sub-region are calling for elections to be held within the next twelve months and, in the meantime, for the appointment of an interim civilian president and prime minister.

The military of the junta, for their part, advocate an 18-month transition. This is the option retained in the charter adopted Saturday in Bamako, after three days of consultations between the junta, civil society and political figures.

This transition is considered far too long for ECOWAS. But supporters of the charter justify this delay by a need for time and authority to turn the country around.

It should be recalled that as soon as the national consultations were over, the M5-RFP had departed from the adopted transition charter. According to them, the document does not reflect “the views and decisions of the Malian people.” Thus, according to the movement, the majority choice during the consultations was for a President and a civilian Prime Minister for the transition. A precision that does not appear in the conclusions of the charter.

North Africa Post's news desk is composed of journalists and editors, who are constantly working to provide new and accurate stories to NAP readers.
NEWER POSTCOVID-19: Morocco aims a transmission rate below one
OLDER POSTCôte d’Ivoire: African Court on Human and Peoples’ Rights calls for restoration of Guillaume Soro to electoral list