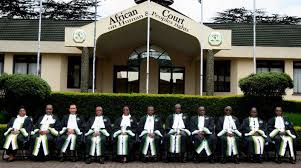 With 46 days to go before the presidential election in Côte d’Ivoire, the African Court on Human and Peoples’ Rights (ACHPR) has asked Abidjan to “stay the execution” of the sentence of Guillaume Soro, and to restore him to the electoral rolls.

The president of the GPS party, exiled in France for several months, saw his candidacy invalidated Monday evening by the Constitutional Council because of a conviction.

In a previous order on April 22, the African Court of Human and Peoples’ Rights had asked Côte d’Ivoire to temporarily suspend the arrest warrant against Guillaume Soro and to release his 19 imprisoned companions. This provisional decision is pending the examination of their case on the merits by the same court.

The decision has never been enforced by Côte d’Ivoire. On April 28, the Ivorian judiciary even sentenced Guillaume Soro for embezzlement of public funds to 20 years in prison and deprivation of his civil and political rights. As a result, Guillaume Soro was removed from the electoral roll and his candidacy invalidated by the Constitutional Council on Monday.

The African Court on Tuesday ordered Côte d’Ivoire to suspend this sentence and “take all necessary measures to immediately remove all obstacles preventing Guillaume Soro from enjoying his rights to elect and be elected”. Clearly, to reinstate him on the electoral list and allow him to be a candidate.

Like the April 22 order, this one could again remain a dead letter. On the day of Soro’s conviction, Côte d’Ivoire formally decided to no longer recognize the jurisdiction of the African Court. And as a sign of the Ivorian state’s interest in the court, its lawyers have made no observations or conclusions in these proceedings.