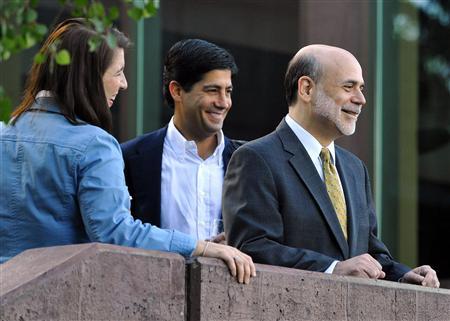 The Fed Up, the ECB Down: Time to Endow the ECB with a Level Playing Field

After years of loose monetary policy, with 0.5 percent interest rate and three consecutive waves of quantitative easing (QE), including buying US$ 85 billion per month of Treasury bonds (T-bonds), Ben Bernanke, the chairman of the Fed’s board of governors, announced in May the Fed’s intention to commence tapering its asset purchase program. The Fed’s ‘tapering’, widely expected to be executed from the fall 2013 and continue through the first half of next year then ending mid-year 2014, has already sent ripples throughout global financial markets: sovereign debt’s yields have started to shoot up in the U.S. and Europe, capital outflows from emerging markets and widespread currency depreciations have picked up the pace.

In Asia, Jimmy Koh, chief economist at the United Overseas Bank Group (UOB) said that QE tapering and the potential rise in interest rates may lead in Asia to an outflow of global capital by US$ 1.4 trillion, and may place continued pressure on Asian currencies which have been weakening since May 2013. In Brazil, the real has lost 20 percent of its value against the dollar since the start of the year, in India the rupee is down 15 percent and Turkey the lira down 10 percent. And as currencies of developed economies are likely to drop, emerging economies could face a double hit. In the attempt to diversify their portfolios beyond the U.S. dollar, Asian central banks have spread foreign exchange in euros, Canadian and Australian dollars, Swedish krona, Norwegian krone and South Korea’s won.

What about Europe? How is the Fed’s change of heart impacting the euro-zone? And how is the ECB going to respond to the Fed “tapering”? Is it well-equipped to do it?

In the euro-zone, economic activity has started to show some life signals. By a puny 0.3 percent, euro-zone seems finally walking out from two years of recession. Even Spain and Italy, severely hit during the sovereign debt crisis are showing some signals of recovery. During a recent press conference, Mario Draghi’s pledge to keep interest rates low for an “extended period of time” is an attempt at capping yields on the euro-zone bonds, a move which could hardly bolster – to borrow John Maynard Keynes’ term – European “animal spirits”, referring particularly to the Europeans’ lackluster consumer confidence. In fact, the Fed’s statement on tapering U.S. federal bonds’ purchases has seriously impacted on euro-zone’s longer-dated borrowing costs, which are now following the U.S. Treasury yields’ increase.

The yields on German bund suffered the widest gap between 2- and 10-year, rising to 161 basis points on July 5, the widest since April 2012 on a closing basis. In Spain, the gap is within 10 basis points of its highest in a year. Italy’s 30-year borrowing cost has climbed almost 50 basis points, while borrowing costs for companies in the euro region rose to the highest levels in eight months. The Fed is doing the right thing for the United States, as Axel Weber, former Governor of the German Bundesbank, pointed out in a recent interview because “that’s their mandate, but it’s undisputed that (…) it has spillover effects to other constituencies. It’s coming for Europe at an awkward point in time.”

The situation seems acting as a comeback of the Asian financial crises of 1997-98.  In 1997, it was Alan Greenspan’s decision to raise US interest rates that incited investors to exit emerging markets to take advantage of better returns at home. Now, it is Bernanke’s tapering that’s prompting capital outflows from Asia, and rising yields on euro-zone’s sovereign and corporate debt.

Then as now the US Federal Reserve, along its mantra “the dollar is our currency, it’s your problem”, is again playing the upper hand in the global financial system. These developments suggest important three things:

Federal Reserve monetary policy is geared to serve the U.S. national interest, and once again produce unsettling effects to other regions.
The ECB policy-kit is frankly inadequate. ECB’s forward guidance, its commitment to maintain accommodative interest rate for an indefinite period of time, has revealed its impotence vis-à-vis the Federal Reserve triggering U.S.-led surge in borrowing costs.
The rise of interest rates in the whole euro-zone would put the region’s nascent recovery at risk. To properly shelter the region’s economy from external shocks, the ECB needs to up its space for maneuver, on a par vis-à-vis its counterpart(s).

Time has come for euro-zone governments to endow Mr. Draghi with a level playing field, to properly fend off the euro-zone economy from selfish decisions taken elsewhere.