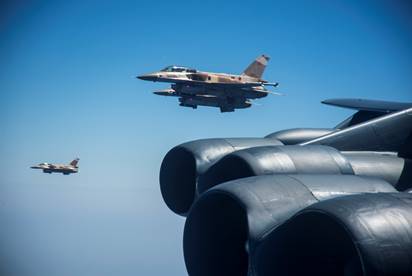 Moroccan F-16’s fly alongside a US B-52H Stratofortress during a Bomber Task Force Europe mission carried out on Sept. 07, announced on Tuesday the US Embassy in Rabat.

In its twitter account, the US diplomatic representation published a photo showing fighter planes of the Royal Air Force flying alongside B-52H Stratofortress strategic bombers, belonging to the 5th Bomb Wing, from Minot Air Force Base, North Dakota.

“Operations & engagements with our allies and partners demonstrate & strengthen our shared commitment to global security & stability”, said the US embassy.

Morocco, which is a major non-NATO ally, regularly holds with the US joint military exercises and training. The North African Kingdom is global player in counterterrorism and works closely with the US and with its European partners to safeguard regional stability and international security.

Moroccan and US armies also cooperate within the frame of the “African Lion” military exercise designed to improve interoperability and mutual understanding of each nation’s tactics, techniques and procedures.