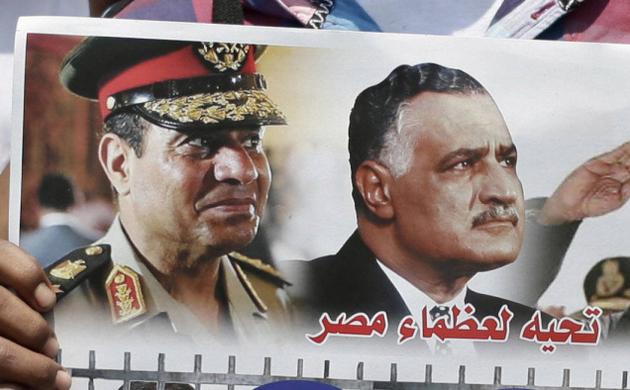 Some Egyptians could be readying General Al-Sisi as the country’s next president after three campaigns supporting the cause kicked off. The General on the other hand has called for “quick political transition” in the interest of stability. Political pundits and figures believe that he stands a great chance to become the head of state despite announcing that he has no desires to rule the country.
Al-Sisi was addressing security personnel as they brace for the commemoration of Egypt’s October 6 crossing of the Suez Canal during the 1973 war with Israel when he warned that the “size of the problems facing [the Egyptian] society” urges for “speeding up the end of the transitional phase.” These remarks contradict Foreign Minister Fahmy’s supposition that the transition will end “by next spring.”
He reminded Egyptians that they “will decide [their leaders]…not the army” which he said will “not support any single” candidate. He added that “you people will choose your rulers, and true, you are the ones who get rid of them too;” considered as a reference of the past regimes.
Meanwhile, campaign groups have already started collecting signatures in Egypt and abroad for General Al-Sisi to stand as president. ‘Complete your favor,’ ‘A nation’s demand’ and ‘Al Sisi for president’ are three different groups who want to force the General to backtrack on his statement of having apolitical desires.
Samuel Ashy, the spokesman of ‘Al-Sisi for president’ likened the General to the iconic Gamal Abdel Nasser and described him as “the son of the late president Nasser” who has the “same charisma and personality.” Abdel Hakim Abdel Nasser, the biological son of the late president, declared that the “spirit” of his father has been found in Al-Sisi.

North Africa Post's news desk is composed of journalists and editors, who are constantly working to provide new and accurate stories to NAP readers.
NEWER POSTTime is right for business in Tunisia
OLDER POSTEgypt: foreign companies and investors exodus