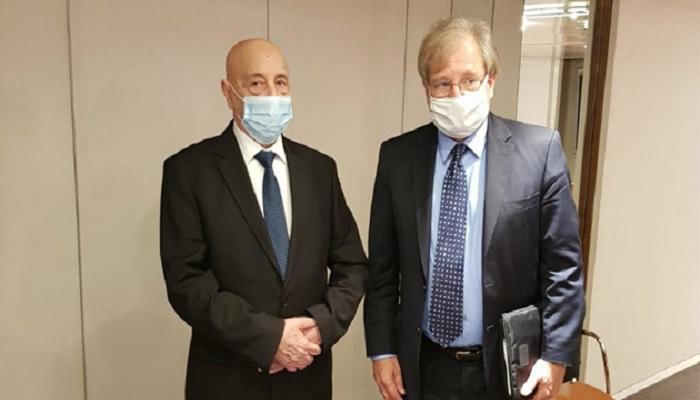 Libya: Discussions between the head of the Tobruk Parliament and U.S. ambassador

Aguila Saleh, the head of the Libyan Parliament based in Tobruk, was in Cairo on Monday 10 August. In addition to his Egyptian meetings, he met several European ambassadors, as well as Richard Norland, the US ambassador to Libya. Washington recently launched a proposal for a return to political discussions among Libyans. It consists of demilitarizing the two cities of Sirte and Al-Joufra.

Aguila Saleh, who took the political limelight against the Tripoli government following Khalifa Haftar’s failure, asked the American ambassador for guarantees. Before any withdrawal of arms, the Tripoli and Misrata militias on the outskirts of the two strategic cities of Sirte and Al-Joufra must first withdraw. The Americans must also guarantee that they will no longer attack these two cities.

Sources close to the head of the Libyan Parliament have claimed that he is trying to develop the American proposal in this way. The Americans, for their part, are seeking to resume oil production by demilitarizing the area and reducing tension. But to do this, Aguila Saleh is calling for a fair distribution of oil revenues between the west, east and south. Political discussions will follow.

Aguila Saleh spoke to the American diplomat about his project to install a new government of national unity to replace Fayez al-Sarraj, an initiative supported by Cairo. As for the American desire to integrate the militias of western Libya into the army, the head of the Libyan Parliament was intransigent. “It is the people who refuse it,” he told the American ambassador.

For his part, Richard Norland, reiterated that the solution for Libya will only be political. Finally, both sides agreed on the need to maintain the ceasefire until the resumption of political talks.