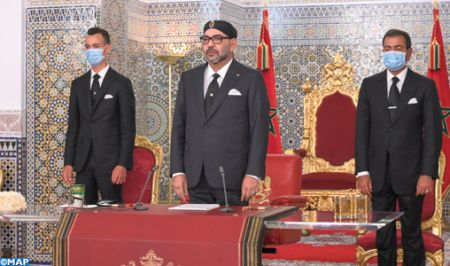 Speech on the State of the nation: A roadmap for economic revival, social integration 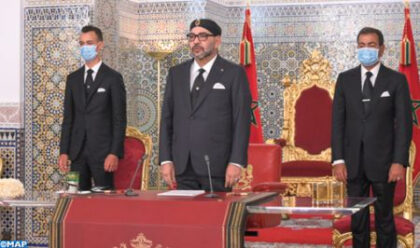 King Mohammed VI of Morocco delivered Thursday evening a speech on the state of the nation wherein he drew a roadmap for economic revival and social integration amidst the COVID-19 pandemic that dealt a serious blow to the economy and to the income of households.

The Monarch announced a number of initiatives to revive the economy, including the launch of an ambitious economic stimulus plan to enable the productive sectors to recover and to increase their ability to provide jobs and preserve sources of income. The initiatives also include the injection of some 120 billion dirhams into the national economy, the creation of a strategic investment fund to stimulate productive activities and support major public-private investment projects, and the expansion of social welfare coverage to all Moroccans within the next five years.

“Our action is not limited to simply facing up to the current epidemic. We also aim to address its social and economic effects by building on a comprehensive, future-oriented approach and by drawing lessons from this experience,” King Mohammed VI said in the speech he delivered on the eve of the celebration by Morocco of Throne Day, marking this year the 21st anniversary of his enthronement.

The coronavirus crisis has revealed a number of shortcomings, especially in the social field, the Monarch noted, mentioning among these shortcomings the size of the informal sector, the inadequacy of social safety nets – especially for the most vulnerable groups – and the exposure of a number of sectors to external fluctuations.

“Consequently, we should seize the opportunity of the current situation to reconsider our priorities and to lay the foundations for a strong, competitive economy and for a more inclusive social model,” he said, calling the Government and the various stakeholders to focus on the challenges and the priorities imposed by the current juncture.

“We need, first, to launch an ambitious economic stimulus plan to enable our productive sectors to recover and to increase their ability to provide jobs and preserve sources of income.

“This means we must mobilize all available resources, offer incentives and come up with solidarity measures to support businesses, especially small and medium-sized enterprises, which are the backbone of our economy,” he underlined.

The Monarch announced, in this regard, that some 120 billion dirhams will be injected into the national economy, which represents 11% of the country’s GDP. This proportion will place Morocco at the forefront of the most enterprising countries in terms of post-crisis stimulus packages, he stated.

“I have also decided that a strategic investment fund should be set up to stimulate productive activities and support major public-private investment projects in various sectors,” the King announced, explaining that the State will contribute to this fund, which will be in charge of the streamlining and coordination of other funds.

The Monarch reiterated his calls for speeding up a sweeping reform of the civil service, and for addressing the structural deficiencies of public institutions and state enterprises to achieve, he said “optimal integration and increase these institutions’ economic and social effectiveness.”

To this end, he called for the creation of a national agency to be tasked with ensuring the strategic management of state contributions and assessing the performance of public institutions.

The projects and initiatives launched and the reforms introduced aim to accomplish one goal, which is to promote development and achieve social justice and inter-regional cohesion, he recalled, insisting that one of the foremost objectives, in this respect, is the provision of social protection for all Moroccans.

“This will remain my chief concern until all segments of society are properly covered,” he said deeming that time has come to launch a decisive process for the expansion of social welfare coverage to all Moroccans within the next five years.

This project needs to be implemented gradually, as of January 2021, using a well thought-out plan, starting with compulsory health coverage and family allowances, then moving on to pension and unemployment benefits.

Such a plan requires tangible reform of current social protection systems and programs in order to increase their direct impact on beneficiaries, especially through the rolling-out of the national social register, the King said, underlining that universal access to social protection coverage should serve as a lever for the integration of the informal sector into the nation’s economic fabric.

“Therefore, I call on the Government to complete the development, together with the social actors concerned, of a comprehensive, practical approach that includes the timetable, legal framework and financing options needed to achieve effective universal social protection.”

To attain this goal, “we must uphold good governance, which is based on constructive social dialogue and on the principles of integrity, transparency and fairness, and see to it that any perversion or exploitation of this lofty social project for political gain is avoided,” King Mohammed VI said, urging all the nation’s stakeholders, without exception to show a sense of patriotism and responsibility, both individually and collectively, and to be actively involved in the national endeavors to handle the current situation efficiently and tackle its economic and social repercussions.