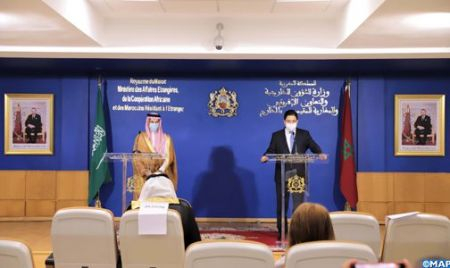 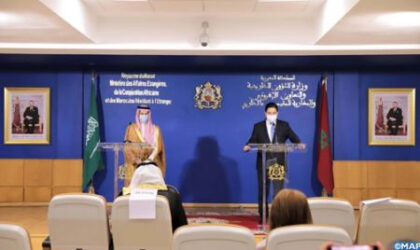 Saudi Foreign Minister Prince Faisal bin Farhan bin Abdullah was on a visit Wednesday in Rabat where he held talks with his Moroccan counterpart Nasser Bourita on bilateral relations and means to develop them.

At a joint press conference after the meeting, Prince Faisal said his talks with his Moroccan counterpart “focused on various aspects of the close relations uniting the two brotherly countries, within the framework of a solid and historical fraternity”.

He expressed Riyadh’s keenness to boost the close ties with Rabat through constant coordination in all fields and in order to achieve their common interests.

The talks reflected the extent of the agreement between Saudi Arabia and Morocco over challenges facing the Arab world, in particular foreign interference and terrorism, he said.

These challenges require joint coordination and cooperation to address them, while ensuring the promotion of the foundations of peace and security throughout the region, said Prince Faisal bin Farhan.

Touching on the Libyan crisis, the Saudi Foreign Minister expressed his country’s concerns about the situation in Libya and about foreign interferences in the Maghreb country, underlining the impact of these interferences on security in the Arab world in general, and on Libya’s neighboring countries in particular.

He stressed, in this regard, that his country supports all efforts aimed at finding a solution to this crisis and that the solution must be Libyan-Libyan.

“A 100 pc Libyan solution is a conviction of the Kingdom of Saudi Arabia and all Arab countries,” he added, stressing that Arab coordination to achieve this goal is a priority for his country in order to put an end to foreign interventions and to the ongoing conflict in this country, as well as for “the preservation of Libya and Libyans from the impact of terrorism, conflict and external interventions and greed”.

Echoing him, Nasser Bourita stressed Rabat’s rejection of military intervention in Libya, saying such interventions will complicate efforts to reach a peaceful solution to the crisis and jeopardize the security and stability of North Africa and the entire Arab region.

He expressed Morocco’s complete support for the positions Riyadh takes to preserve its security and sovereignty.

Saudi Arabia’s safety is a red line for Morocco, which will continue to support it at all arenas and international organizations, he stated.

North Africa Post's news desk is composed of journalists and editors, who are constantly working to provide new and accurate stories to NAP readers.
NEWER POSTSpeech on the State of the nation: A roadmap for economic revival, social integration
OLDER POSTThrone Day: King Mohammed VI Grants Pardon to 1,446 Convicts