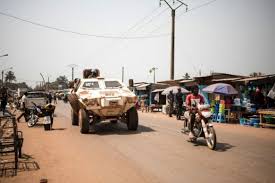 The UN Security Council unanimously decided Tuesday to extend its sanctions regime against the Central African Republic for one year, including an arms and ammunition embargo with some exemptions, while also renewing the mandate of its related Panel of Experts for 13 months.

The Council decided that Member States should continue to prevent the supply, sale or transfer of arms and related material to the Central African Republic until 31 July 2021.

The arms and ammunition embargo, however, exempts, among others, supplies to the Central African Republic security forces of weapons with a caliber of 14.5 millimeters or less, and ammunition and components specially designed for such weapons, as well as ground military vehicles and rocket‑propelled grenades.

This is the third consecutive time that the arms embargo, enacted in December 2013 after the outbreak of a military-to-political crisis in the Central African Republic has been relaxed. And this time the decision was taken unanimously.

France, which drafted the resolution, is satisfied with the unity demonstrated by the Security Council.

In January, during the vote on the embargo renewal, Russia had tabled a counter-proposal forcing France to revise its copy. A compromise had finally been reached with the authorization to import 14.5 caliber and armed armored vehicles. The resolution was finally voted with 2 abstentions.

The embargo is renewed this time for another year. The Security Council did not wish to discuss the embargo again in six months’ time when elections in the Central African Republic are due to be held at the end of December.

In its resolution, the Security Council recalls the need for supplier countries to notify the Sanctions Committee 20 days before deliveries. In their last report, the experts noted the failure to comply with this requirement.

The Security Council reiterated its readiness to listen to the Central African Republic authorities with regard to “their legitimate concerns”. The country is continuing its efforts to rebuild its regular army and redeploy its troops. The Central African authorities, for their part, have consistently called for the total lifting of the embargo.

The council also requested that the Secretary-General assess, by no later than 15 June 2021, the progress achieved by the Central African Republic on the key benchmarks for lifting the arms embargo.