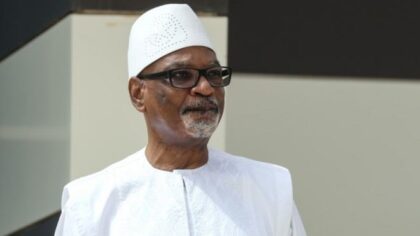 President Ibrahim Boubacar Keïta said he would repeal the decrees appointing the judges of the Constitutional Court still in office, which amounts to a “de facto dissolution”.

The move came after days of mobilization against President IBK in Bamako, with the M5 movement calling for civil disobedience, while barricades were erected and public buildings ransacked. The clashes left four people dead and dozens injured. Several protest leaders were arrested.

In an attempt to calm the situation, the president announced a “de facto dissolution” of the Constitutional Court on Saturday evening.

In a brief televised address, the second in one week, Ibrahim Boubacar Keïta said he would repeal the decrees appointing the court judges still in office, which amounts to a “de facto dissolution”.

“I have decided to repeal the decrees appointing the remaining members of the Constitutional Court and move towards the implementation of the recommendations of the ECOWAS mission,” he said. “This de facto dissolution of the Court will lead us next week to ask the competent authorities for the appointment of members so that, quickly, a reconstituted court can help us find solutions to disputes arising from the legislative elections,” said the President.

The Constitutional Court’s decision to invalidate some 30 results of the March-April parliamentary elections is seen as a trigger for the dispute, which reached its climax last Friday and Saturday.

During Friday’s demonstrations, Issa Kaou Djjim had called the demonstrators to civil disobedience and to occupy administrative buildings.
Violent incidents broke out again on Saturday night in several districts of the Malian capital. At least four civilians were killed.

At midday on Sunday July 12, Imam Mahmoud Dicko, the moral authority of the protesters, appealed for calm. “The struggle must continue, but without violence,” he said.