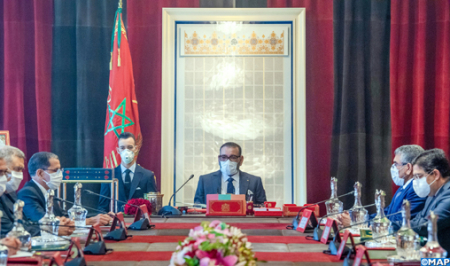 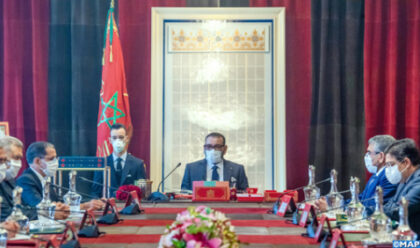 King Mohammed VI, who was accompanied by Crown Prince Moulay El Hassan, presided this Monday, July 6, over a council of ministers devoted, among other things, to examining the general orientations of the reviewed budget law for the year 2020, announced a statement, read out by spokesperson for the Royal Palace Abdelhak Lamrini.

The Council of Ministers also adopted  a number of draft laws, a draft decree and a set of 11 international agreements, including the association agreement with the UK.

At the beginning of the council, the Sovereign enquired about the evolution of the coronavirus epidemiological situation, particularly after the easing of the confinement measures.

The Minister of Health said that the epidemiological situation is stable under a high level of vigilance and that the majority of those affected are asymptomatic. He also clarified that despite the easing of the confinement, the fatality rate as well as the number of critical cases remained low.

The increase in the number of coronavirus cases recorded recently is mainly explained by the increase of early collective screenings, intensification of consultations and follow-up of contact persons, the Minister said. He added that a national scientific commission is monitoring the evolution of this epidemic and putting in place the necessary treatments and treatment protocols.

Afterwards, in accordance with the provisions of Article 49 of the Constitution, the Minister of Economy and Finance made a presentation on the general orientations of the amended finance bill in the international and national contexts, characterized mainly by the repercussions of the Covid-19 pandemic.

The general guidelines of the amended budget bill 2020 are mainly based on the support for the gradual recovery of economic activity; the preservation of employment; and the acceleration of the implementation of administrative reforms.

To give a new impetus to economic recovery, measures will be implemented, within the framework of sectoral agreements, taking into account the specificities of each sector, the magnitude of the impact suffered following the health crisis, and the time required for the resumption of activity.

Funds necessary to cover the risks of guaranteed loans will be granted to all business segments, including public enterprises. Advantageous conditions will be applied through an interest rate not exceeding 3.5%, and a repayment period of 7 years, with two years of grace and a State guarantee varying between 80% and 90% and up to 95% for very small businesses.

The new text also provides for the promotion of public investment in order to accelerate the revitalization of the national economy.

In this connection, resources from the Special Fund for the Management of the Coronavirus Pandemic will continue to be extended, until the end of the year, to provide social and economic support to the sectors, which will face difficulties even after the lifting of the confinement.

Specific support for the various sectors will be activated, in the framework of contracts with the economic stakeholders concerned. Support for economic recovery will be conditioned however, by the preservation of more than 80% of employees declared to the National Social Security Fund (CNSS) and the rapid regularization of the situation of undeclared employees.

The economic recovery also requires, according to the new text, the implementation of the provisions of the law relating to the simplification of procedures and administrative formalities, in particular those relating to compliance with maximum deadlines for responding to investment requests.

It also requires accelerating the implementation of the Public Service Charter, to consecrate the transparency and efficiency in the services rendered to citizens and investors, through support for the digital transformation of the administration and the generalization of digital services, and accelerate the implementation of the national financial inclusion strategy, in particular through the encouragement and generalization of mobile phone payment.

The Minister of Economy and Finance commented at the end of his presentation on the assumption that the 2020 finance law provides for 5% decline in GDP and a budget deficit of 7.5%, and insisted that the draft primarily seeks to overcome rapidly the economic and social effects of the Covid-19 pandemic crisis.

The text will be submitted to the parliament for final adoption before entering into force.

During the Council, the Monarch appointed Mounia Boucetta Secretary General of the Minis-try of Foreign Affairs, African Cooperation and Moroccans Abroad, and several ambassadors to a number of African, Arab, European, Latin American, and Asian countries.

North Africa Post's news desk is composed of journalists and editors, who are constantly working to provide new and accurate stories to NAP readers.
NEWER POSTMorocco to open military air training facilities to national airlines
OLDER POSTMorocco has one of world’s most advanced train infrastructure-Global ranking