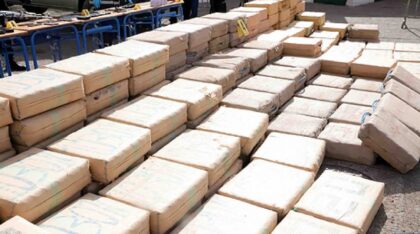 Moroccan security services have seized 5.8 tons of cannabis in a major drug bust operation carried out over the weekend near the Southern Moroccan city of Laayoune.

Fourteen people, including a Mauritanian and a Senegalese national, were captured during this anti-drug operation. Search of their premises led to the seizure of an AK-47, a hunting rifle, 66 bullets, 114 cartridges, tear gas canisters, binoculars, mobile phones, a GPS device and a false license plate.

Moroccan authorities have opened a probe to determine the possible links between this drug ring and international drug-trafficking networks.

The investigation revealed that the abducted victim had met the other suspects in the case to sell them cocaine in the city of Safi, 157 kilometers from Marrakech, according to the General Directorate of National Security (DGSN).

The suspects abducted the victim after they discovered his fraudulent intentions and realized that his merchandise was nothing but white powder.

The four individuals kidnapped the victim, beat him, and locked him up in a rural town near Safi. The mistreatments were all recorded on tape and sent to his family for blackmail, according to the DGSN.

Field investigations led to the localization of four individuals in the district of Bourgone in Casablanca, as well as the victim, who sustained several injuries during the abduction, and his brother for their alleged involvement in scams.

Search operations led to the seizure of one kilogram of white powder, which DGSN suspects to be cocaine, as well as knives and three cars.

All six suspects, aged between 22 and 43, were put in custody for interrogation while police conduct further investigations to determine the circumstances of the case and determine other parties involved in the criminal act, the DGSN concluded.

These operations show the sustained efforts deployed by Morocco’s security services to combat drug trafficking and dealers. The International Narcotics Control Board has commended Morocco’s proactive strategy and tireless efforts to combat drugs trafficking and consumption, praising the country’s action focusing on both prevention and treatment of addiction.