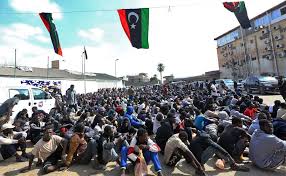 The United States has listed Algeria among the countries wherein the illegal trade in people is widely spread, affirming that it will work tirelessly to free those still enslaved and will punish their tormentors.

In its 2020 Trafficking in Persons Report, Washington placed Algeria on its “Tier-3 watch list”, the lowest ranking, which could trigger US sanctions and aid cuts.

“The Government of Algeria does not fully meet the minimum standards for the elimination of trafficking and is not making significant efforts to do so; therefore Algeria was downgraded to Tier 3”, says the US report.

Over the past five years, human traffickers have exploited domestic and foreign victims in Algeria, adds the document, noting that undocumented sub-Saharan migrants are most vulnerable to labor and sex trafficking in Algeria due to their irregular migration status, poverty, and in some cases language barriers.

Unaccompanied women and women traveling with children are also particularly vulnerable to sex trafficking and forced domestic work, underlines the report. Refugees and asylum-seekers are also vulnerable to trafficking either before or during their migration to Algeria.

In some instances, traffickers use false promises of work, such as that in a beauty salon or restaurant, to recruit migrants to Algeria where they ultimately exploit them in sex trafficking or forced labor.

According to the US report, many African migrants illegally work in construction and some engage in commercial sex acts to earn money to pay for their onward journey to Europe, which puts them at high risk of sex trafficking and debt bondage.

Traffickers often use restaurants, houses, or informal worksites to exploit victims, making it difficult for authorities to locate traffickers and their victims.

Furthermore, the Algerian authorities prosecuted and convicted fewer traffickers and identified fewer victims in comparison to last year, adds the document, deploring the lack of Algerian effective procedures and mechanisms to appropriately and proactively screen for, identify, and refer potential victims to protection services.

Due to the Algerian government’s ineffective screening measures for trafficking victims among vulnerable populations, such as African migrants, refugees, asylum-seekers, and individuals in commercial sex, the authorities continued to punish some victims for unlawful acts traffickers compelled them to commit, says the report.

The ongoing Algerian measures to deport undocumented migrants deterred some victims among this population from reporting trafficking crimes to the police or seeking much-needed assistance, underlines the U.S. department.

Furthermore, Algeria did not provide protection services appropriate for the needs of trafficking victims, and it did not report how many victims received assistance, says the report, calling on Algerian authorities to increase investigations, prosecutions, and convictions of sex and labor trafficking offenders and punish them with adequate penalties.

Washington also urges Algiers to ensure victims of all forms of trafficking are referred to and receive protection services, including shelter appropriate for the needs of trafficking victims, adequate medical and psycho-social care, legal aid, and repatriation assistance.