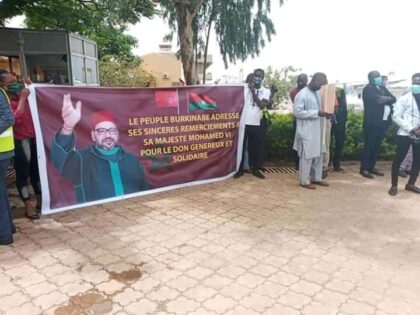 The protective medical gears and anti-covid-19 drugs sent by Morocco’s King to several African countries to help them cope with the coronavirus pandemic continue to receive widespread appreciation as a move which brings in hope, comfort and solidarity to the continent.

To ensure that this vital medical aid for the treatment of covid-19 patients reach its destination despite borders closures, Moroccan flag-carrier Royal Air Maroc (RAM) has mobilized its fleet to deliver this most-coveted items in the world to African countries.

At a meeting held Tuesday at the AU headquarters with Morocco’s Permanent Representative to the AU and UNECA, Mr. Kwesi said Morocco has always been “the first country to show up in good and bad times”, which proves “that it is a true friend and a close brother” of Africa.

“The heart of Morocco has always been in Africa and this goes back to the African national liberation era”, said the AUC deputy chairman.

For his part, the EU Commissioner for Economic Affairs Victor Harison expressed sincere thanks to King Mohammed VI, the Moroccan government and people for the medical aid, saying the royal initiative gives the example of solidarity in Africa.

AU Commissioner for human resources Sarah Mbi Enow Anyang Agbor also thanked the Moroccan Monarch for his supportive move, saying the medical aid sent by the Sovereign backs the efforts made by African countries to curb the coronavirus epidemic.

“We have a shared responsibility towards our continent, Africa. We must draw inspiration from the example set by King Mohammed VI”, she stressed, praising the landmark cooperation initiatives and projects launched by King Mohammed VI to boost inter-African integration, citing in this regard the Nigeria-Morocco gas pipeline project and the Moroccan fertilizer complex project in Ethiopia.

In the Comoro Republic, one of the beneficiary countries of the royal anti-covid-19 medical aid, Mohamed El-Amine Souef, foreign minister of these Islands, said the royal initiative ushers in “a new step in South-South and African cooperation”.

It also reflects the fraternal and friendly ties existing between the Union of the Comoros and the North African Kingdom, added the Comorian top diplomat.

The speaker of the Pan-African Parliament Roger Nkodo Dang and SG of the Forum of Presidents of the Legislative Powers of Central America and the Caribbean (FOPREL) Santiago Rivas Leclair also commended the Moroccan medical aid to African countries.

The permanent representatives to the AU have also hailed the royal initiative showing the Kingdom’s firm solidarity with African countries during the global health crisis.

The United States, Germany and several others countries and international organizations have all welcomed Morocco’s solidarity, its championing of south-south cooperation and its leadership in the fight against the coronavirus pandemic.

When the dust settles and the world weathers covid-19 crisis, times will come to recognize the change-makers, the lodestars, the enablers, the doers and those who showed leadership, solidarity, determination, strength, resilience and humanity.