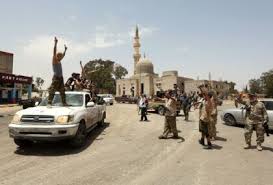 The proxy war in Libya between a UN-backed government in Tripoli armed by Turkey and a rival government in eastern Libya backed by Egypt, UAE, Saudi Arabia and Russia is far from being over with the victory of Serraj government over Haftar forces in Tripoli’s outskirts.

The Government of National Accord is now putting pressure to regain Sirte, which Egyptian President Abdelfattah Sisi declared as a red line.

“Let’s stop at this (current) front line and start negotiations to reach a political solution to the Libyan crisis,” Sisi said referring to Sirte and Jorfa.

The Tripoli-based government denounced remarks of the Egyptian president, who said Sirte and Jufra in Libya are “a red line,” calling it “a clear declaration of war and a blatant interference” in Libyan affairs

“Sisi’s statements that Sirte and Jufra are a red line, according to his description, is a blatant interference in our country’s affairs, and we consider it a clear declaration of a war on Libya,” Abdel-Hadi Darah, a military spokesman loyal to the Tripoli-based government said.

Meanwhile, Turkey said on Saturday that Haftar’s forces in eastern Libya needed to withdraw from the strategic city of Sirte for a lasting ceasefire.

Ibrahim Kalin, the presidential spokesman, told the AFP news agency that Sirte and Al-Jufra should be evacuated by Haftar’s forces for a “sustainable ceasefire”.

Kalin said a ceasefire in Libya would be possible if everybody went back to their positions in 2015, referring to the Skhirate agreement signed in Morocco that year and scrapped last month by Haftar.

Sisi apparently could not swallow the humiliating rejection of his truce plan, which he put forward to save his ally Haftar whose forces kept receiving setbacks one after the other in recent weeks.

On a visit to Sidi Barrani military base near Libya, he ordered his forces to prepare for a mission outside the borders hinting at an imminent intervention in Libya to save his ally Haftar.

So far, media reports speak of tacit Russian support, while the UAE and Saudi Arabia expressed outspoken backing for Sisi comparing Egypt’s security as their own.

Haftar would bring to Libya the same kind of military and conservative rule that Egypt and the Gulf monarchies have.

Turkey, on the other hand, which considers Sisi as a coup general, has increased its military intervention to support the Tripoli-based government in recent months, sending ships off the coast, planes to bring weapons, mercenaries and armed drones to the country.

During the proxy war over Tripoli, Turkish Bayraktar drones have defeated the UAE-supplied Russian Pantsir air defense and were instrumental in pushing Haftar’s forces back.

Egypt’s willingness to send troops is fraught with risk. Though it has a massive army, it is very burdened by the policing it has been involved at and has been untested in foreign soils. Almost all interventions of the Egyptian army in recent history (Syria, Yemen and Jordan) have been a fiasco.

Analysts however consider that Sisi will be contented with air strikes as sending troops on the ground would be an invitation to a direct involvement by Turkey.

Turkey has said it will build new military bases in Libya, which it could add to the bases it has in nine countries.

Turkey is trying to tell the West that it has control over the eastern Mediterranean and to cast itself as a force that can push back Russia in the region.

The West so-far seems disinterested in a direct involvement in the Libyan mayhem and Egypt’s call for a truce was received with indifference globally.