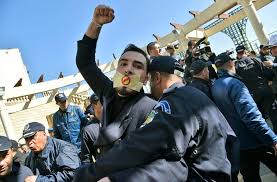 Reporters Without Borders (RSF) has called on the Algerian authorities to end the harassment and prosecution of journalists in a bid to gag the media and throttle freedom of the press.

In a statement issued Friday, RSF says the crackdown on independent journalists and bloggers has intensified despite the coronavirus epidemic, noting that four journalists have been brought before courts, sentenced to jail terms or interrogated by the police during the past few days alone.

Reporters Without Borders cites in this regard the case of Ennahar’s correspondent, Djamel Ali Toubal, who was given a summary trial because of his coverage of the anti-government “Hirak” and sentenced to two years in prison.

For his part, Merzoug Touati, a blogger and reporter for L’Avant-Garde Algérie, a news site that is blocked in Algeria, was arrested while covering a protest in support of prisoners of conscience on June 12 in Bejaia, 245 km east of Algiers.

Touati, who has been convicted in the past in connection with his posts and his journalist reporting, refused to be tried by video-conference, so his trial was scheduled for July 1.

Mustapha Bendjama, the editor of the regional French-language newspaper Le Provincial, is another victim of the Algerian regime. Bendjama appeared in court in Annaba, 600 km east of Algiers, on June 17 to face a possible three-year jail term on charges of “inciting an unarmed gathering,” “opposing the holding of an election” and “using a gathering to oppose actions approved by state authorities.” The case was adjourned until July 1.

As to Khaled Drareni, editor of Casbah Tribune news website and Algeria correspondent of both TV5 Monde and RSF, he was questioned by an investigating judge on June 18 in a “hearing” held inside Kolea prison in west Algiers, where he has been held since March 29.

Arrested while covering a peaceful Hirak protest in Algiers, Drareni is facing up to ten years in prison on a charge of “inciting an unarmed gathering” and “endangering national unity.”

“The number of judicial proceedings against Algerian journalists is extremely disturbing and constitutes a blatant erosion of press freedom in Algeria,” said RSF.

“We call on the Algerian authorities to stop manipulating the justice system and to stop obstructing the work of journalists, who have just done their job by covering the Hirak protest movement”, added the international NGO advocating the right to freedom of information.

Algeria is ranked 146th out of 180 countries and territories in RSF’s 2020 World Press Freedom Index, five places lower than in 2019.